by Friends of UNFPA, Inc 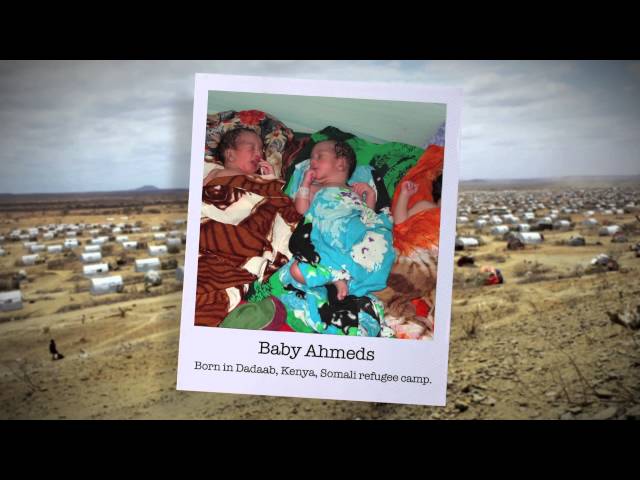 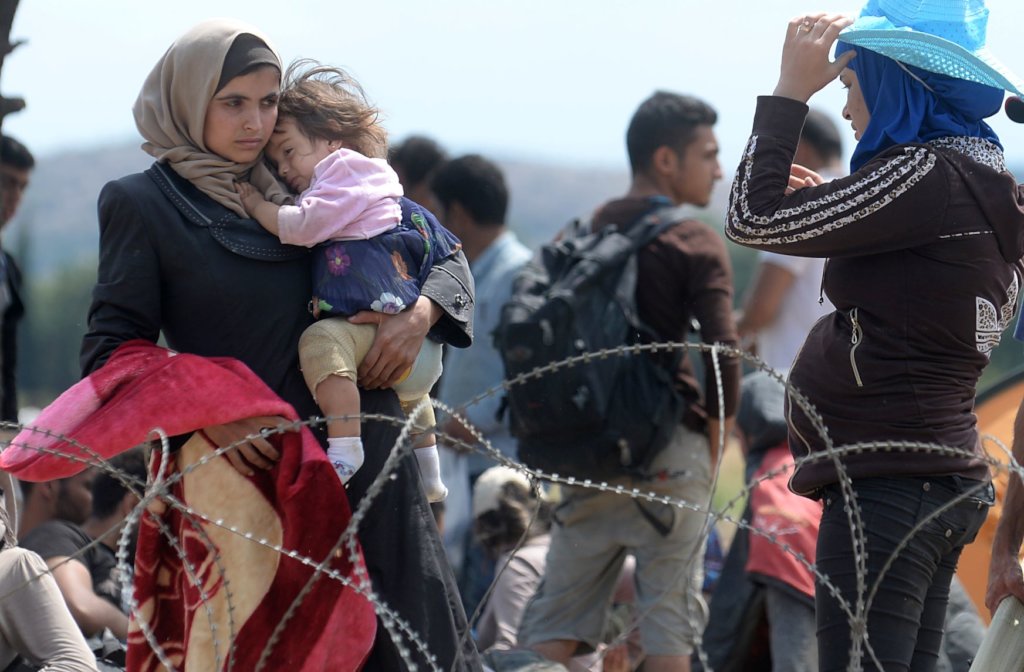 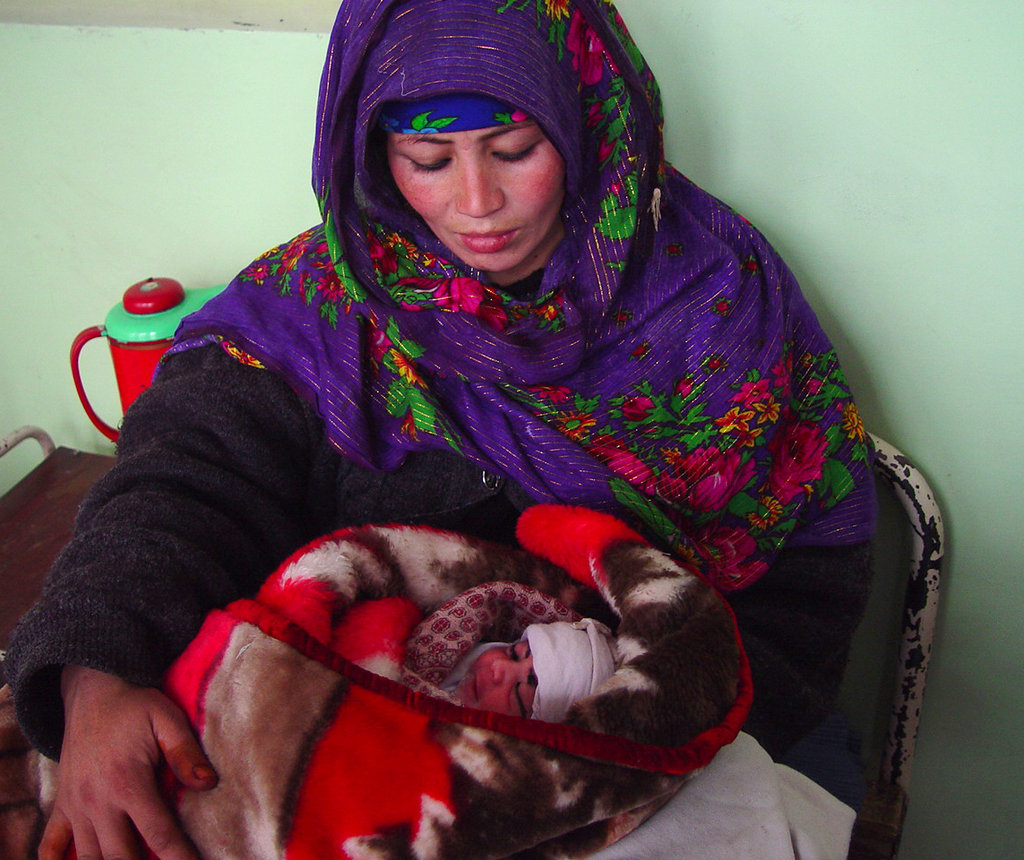 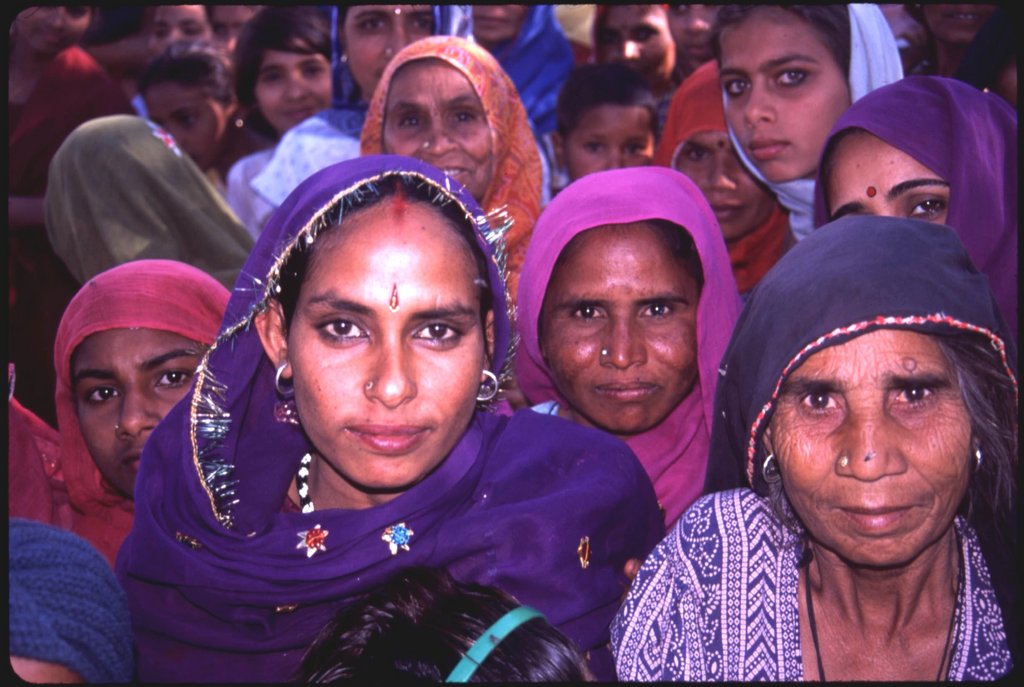 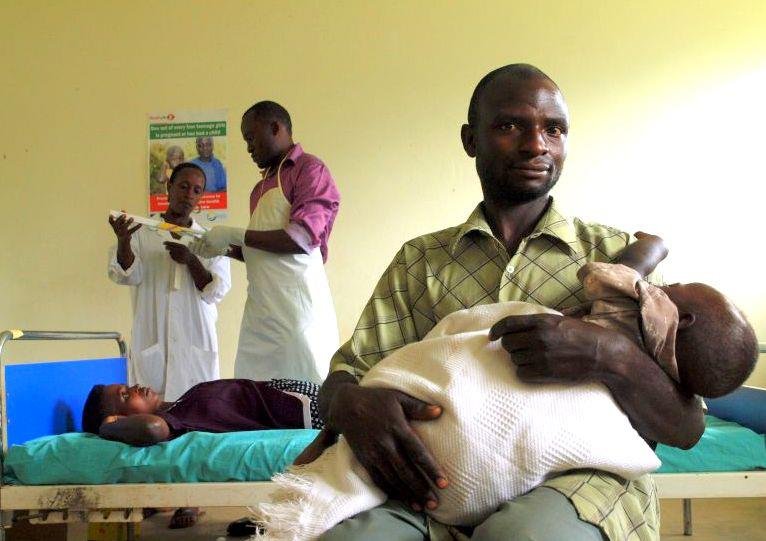 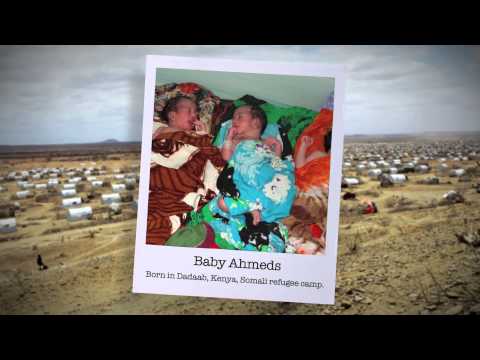 Hope on Wheels for women devastated by Typhoon Rai

By Friends of UNFPA - Communications Team

SAINT BERNARD, The Philippines – “Our house was gone, we could smell petrol fuel leaking from the fishing boats, and the wind was howling. I wanted to run to the mountains with my two young children.”

Fleeing her home at seven months pregnant wasn’t what 30-year-old Mariel had planned for her family during the Christmas festivities. But as Super Typhoon Rai barrelled down on the small fishing village of Saint Bernard, in the Southern Leyte province of the Philippines, it was her only option.

The third largest storm ever to hit the northern hemisphere, Rai demolished homes across the islands, splintering trees and forcing hundreds of thousands to run for their lives. Nearly four months on, many people are still without stable housing or access to food or medical care: Most health facilities remain obliterated, others hanging on by a thread. Health staff don’t have clinics to work in, while contraceptive supplies and medical equipment are sorely lacking.

A gift of $15 provides 3 women with emergency birth kits, which contain everything a woman needs to prevent infection and safely give birth during an emergency.

UNFPA’s Executive Director Dr. Natalia Kanem reflected after meeting with some of the women and girls affected: “A record number of people around the world are displaced and in need of humanitarian assistance. Humanitarian crises don’t just leave communities upended, they also expose women and girls to greater levels of vulnerability. Disasters and conflict worsen gender inequalities, with women and girls paying the heaviest price.”

Providing sexual and reproductive health care can be dangerously jeopardized in a crisis setting, including prenatal and antenatal services, as infrastructure is destroyed and roads become impassable. Scarce if any access to health services leads to a rise in maternal and newborn deaths, spikes in sexual violence and, as a new UNFPA report shows, soaring rates of unintended pregnancies.

Increasingly anxious about giving birth in the midst of a disaster zone, Mariel’s hopes were lifted when she spotted an unusual vehicle in town. “One day, a white truck was parked in the community, and someone told me they had health services there. I didn’t believe them, but eventually I went, and my worries were gone,” she said, relieved at the arrival of skilled health staff and new medical equipment.

$150 provides medications, supplies, and equiment to a rural health clinic, so staff at the clinic can provide essential care and manage obstetric emergencies.

The white truck is a UNFPA-supported Women’s Health on Wheels vehicle, a mobile birthing facility deployed to hard-to-reach areas and during humanitarian emergencies. The rapid response mobile units are the default set-up when basic emergency obstetric and newborn care services are disrupted. Based in the centre of Saint Bernard, the truck has become a beacon of survival and hope for many of the vulnerable women and girls in the community.

The mobile units are a key part of UNFPA’s response, which as of March 31 had reached nearly 14,000 women and girls in affected areas with sexual and reproductive health and protection services. This includes distributing dignity kits containing sanitation, menstrual and hygiene products, as well as providing emergency maternity tents and setting up safe spaces where survivors and those at risk of gender-based violence can go to seek help and support. In Southern Leyte alone, UNFPA has so far supported over 1,000 safe deliveries and ensured more than 1,700 family planning consultations.

A crisis within a crisis

Observing the devastation brought on by the storm, Dr. Kanem continued: “With the Philippines ranking as one of the countries most prone to crises – from conflict to earthquakes and typhoons – millions of the most vulnerable people, particularly women and girls, are facing multiple layers of risk.”

An estimated 400 lives were lost during the typhoon and more than half a million people displaced, of which some 60,000 have yet to return to their homes – if they still have them. Over 11 million people were affected by the storm; among them are 4 million women of reproductive age, 1.4 million adolescent girls and a quarter of a million women who are currently pregnant.

While the statistics are grim, Dr. Kanem added there is a solution – by listening to and investing in women. Their leadership and resilience bring communities together as they spearhead efforts to mitigate and adapt to climate change.

On 14 February, Mariel became the first woman to give birth in the mobile health unit. She told us she had named her new daughter Heart Eunne Fae: Heart for being born on Valentine’s day, and Eunne Fae as a tribute to UNFPA. When Dr. Kanem asked about her wish for Eunne Fae, Mariel replied: “Brighter skies, a roof over her head, and a better life than what we have now. And to live in a world where she can grow up without fear and become a girl who can bring change to our community.”

You can equip a midwife to support 50 women like Mariel through safe deliveries with a generous gift of $400.

By Communications Team - Friends of UNFPA 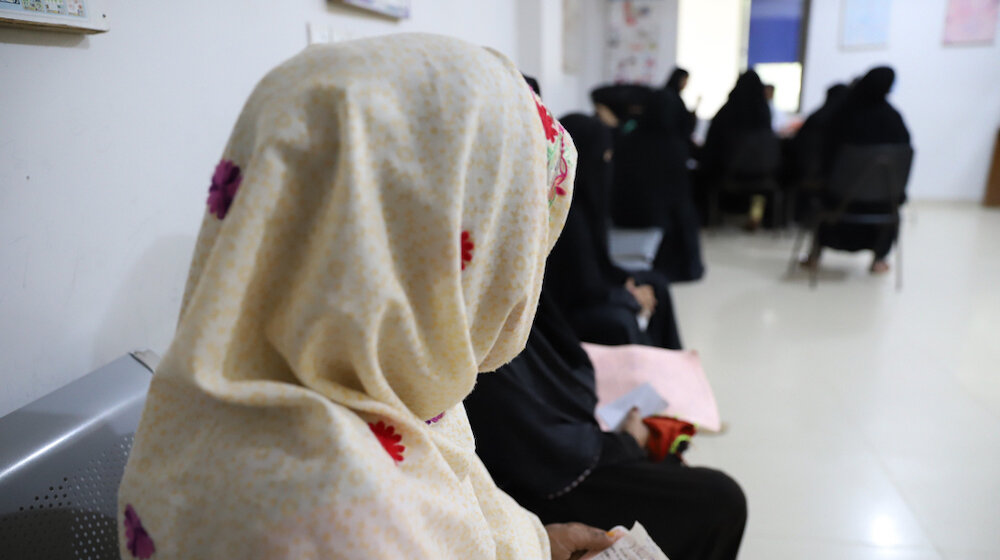 24 year-old Seema moved with her three daughters to be closer to her parents during the pandemic. Sadly, her youngest daughter died because Seema couldn't access infant health services. Now, pregnant for the fourth time, Seema attends a clinic for prenatal care. When she's ready to give birth, she can also receive safe delivery care. And, her newborn will have access to infant health services.

$20 provides one midwife with the equipment she needs to ensure women like Seema can give birth safely, no matter what.

Seema is not alone in needing this lifesaving care. Noor, the senior midwive at Seema's clinic, and her colleagues see 500 patients every day. "Hundreds of women visit the facility every day. I sometimes feel tired but these women need us. When we help them, we forget our pain," said Noor.

$150 provides a rural clinic with supplies, medications, and equipment to manage most obstetric emergencies.

Thanks to your support, Seema is having a healthy pregnancy and is hopeful for a safe delivery. And, your support makes it possible for her little one to receive the health care they need. No woman should have to experience what Seema did. Thank you.

By Dana Kirkegaard - Communications at Friends of UNFPA 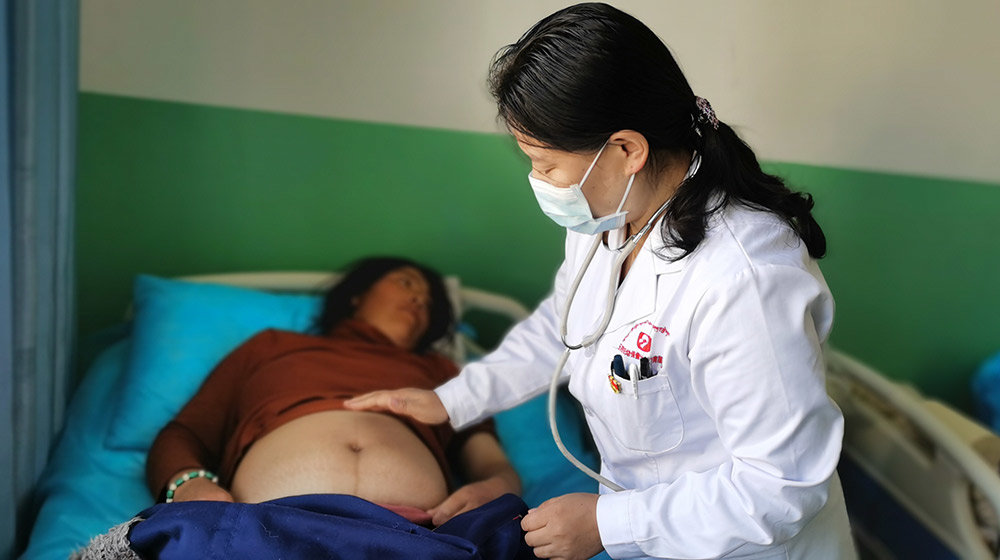 Even though Dr. Cairen had been caring for pregnant women and new moms in northwest China for more than a decade, she didn't have all of the skills of a midwife. After participating in a UNFPA training course, she feels even more confident in her abilities and prepared to care for women. She says, "As a doctor working in the field, I carry out multiple tasks including attending births, procuring medicines, and providing outpatient services such as cervical and breast cancer screening.”

Just $15 provides three pregnant women with an emergency birth kit, which has all of the essentials for safe childbirth, even without a health care professional like Dr. Cairen.

One of the skills Dr. Cairen learned was how to manage pregnancy complications. This was important for one of Dr. Cairen's recent patients, who gave birth at age 41. Because the woman was able to deliver at her local clinic, her delivery was free. And, when barriers like cost and travel are eliminated, more women get the care they need to have a safe delivery.

For $150, you can supply a rural health clinic with the medications and equipment it needs to provide pregnant women with prenatal and safe delivery care, even in the event of complications.

Dr. Cairen has seen this change, too. She observed that her patients are more comfortable and that she is able to provide quality care to more women and families. This is the work you make possible. Thank you.

$400 equips one maternity ward and midwife with the resources they need to support 50 women through safe deliveries.

Hiwot runs for her life and the life of her baby

By Dana Kirkegaard - Communications at Friends of UNFPA 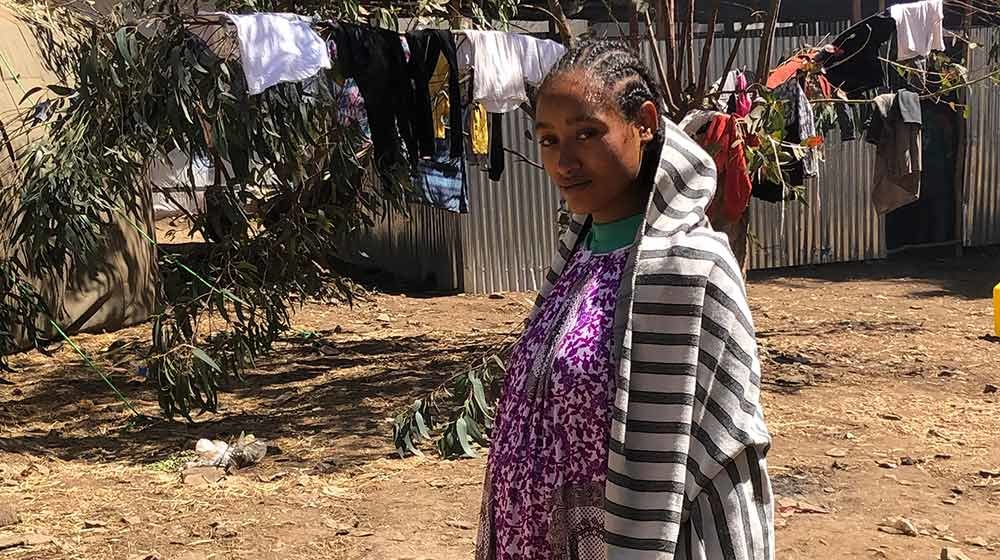 Hiwot was 7-months pregnant when she fled violence

Hiwot was 7-months pregnant when conflict in the Tigray region of Ethiopia forced her and her husband to flee to the nearby state of Amhara. The situation in Ethiopia has worsened drastically in the months since November 2020. Thousands of people have been killed and 2 million people like Hiwot have fled their homes for safety elsewhere.

Just $15 will provide three pregnant women like Hiwot with an emergency birth kit, which has all of the essentials for a safe childbirth, even without a health care professional.

Hiwot's main priority was her safety and the safety of her baby. Now, Hiwot and her husband are living with neighbors from Tigray in a camp for displaced people. UNFPA midwives are in the camp providing prenatal care, safe delivery care, and family planning. Hiwot has received a UNFPA emergency birth kit to ensure that she and her baby survive childbirth.

You can supply a rural health clinic with the medications and equipment it needs to provide pregnant women, including migrating women, with prenatal and safe delivery care, even if they experience complications for $150.

The trauma has impacted Hiwot greatly. “I have nightmares,” she said, “about how will I keep the baby alive with no income and living in such difficult conditions.”

But thanks to supporters like you, Hiwot won't have to worry about giving birth. Your contribution of $50 provides 10 women with emergency birth kits, containing soap, a razor, a tarp, and other crucial supplies for childbirth. 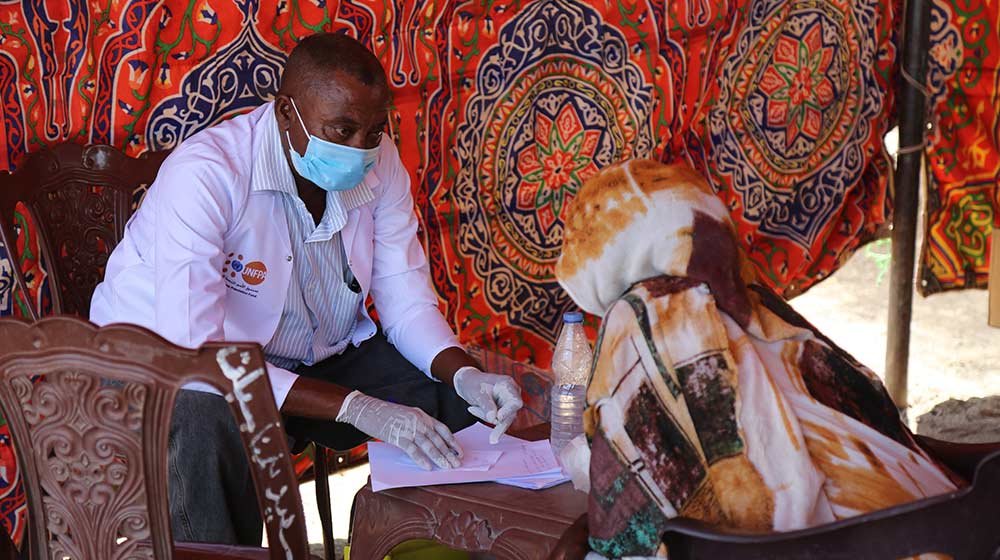 More than 33,000 people have fled conflict in Ethiopida for nearby Sudan. Most of these refugees are women and children, with violence concentrated among men. One woman said, "I have seen men are slaughtered in front of my own eyes. I cannot forget that. I ran from home when the gunfire was going off. I still don’t know where my father and brothers are.”

The refugees are moving to Sudan just a few months after Sudan experienced the worst flooding of the past several decades. UNFPA is working to meet the reproductive health needs both of refugees and of those affected by the floods.

Conflict and natural disasters don't stop women from giving birth. Your gift of $15 provides three emergency birthing kits, so women can safely deliver their baby even in a humanitarian crisis.

One Ethiopian refugee lost her baby at 9 months when she couldn't reach a health facility in time. No woman should have to endure such hardship. UNFPA's work includes referring women to facilities that can manage obstetric emergencies. Many times, these women need a Caesarean section to save their life and the life of their baby.

$150 provides a rural clinic with the medicines and equipment it needs to safely manage obstetric emergencies.

UNFPA estimates that there are at least 700 pregnant Ethiopian refugee women and 20,000 pregnant Sudanese women in need of lifesaving reproductive health care. You can be there, for every woman and baby.

Your contirbution of $25 provides one woman with the hygiene supplies she needs to care for herself and her baby for the first six months of life. You can provide this healthy start. 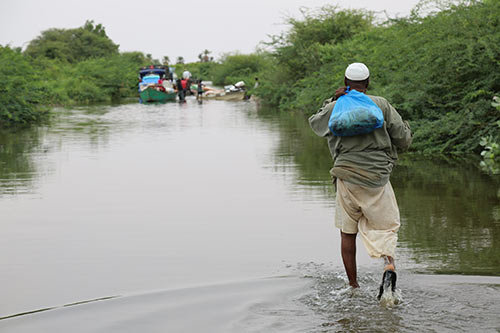 Donating through GlobalGiving is safe, secure, and easy with many payment options to choose from. View other ways to donate
Friends of UNFPA, Inc has earned this recognition on GlobalGiving:

GlobalGiving
Guarantee
Donate https://www.globalgiving.org/dy/cart/view/gg.html?cmd=addItem&projid=7106&rf=microdata&frequency=ONCE&amount=25
Please Note
WARNING: Javascript is currently disabled or is not available in your browser. GlobalGiving makes extensive use of Javascript and will not function properly with Javascript disabled. Please enable Javascript and refresh this page.