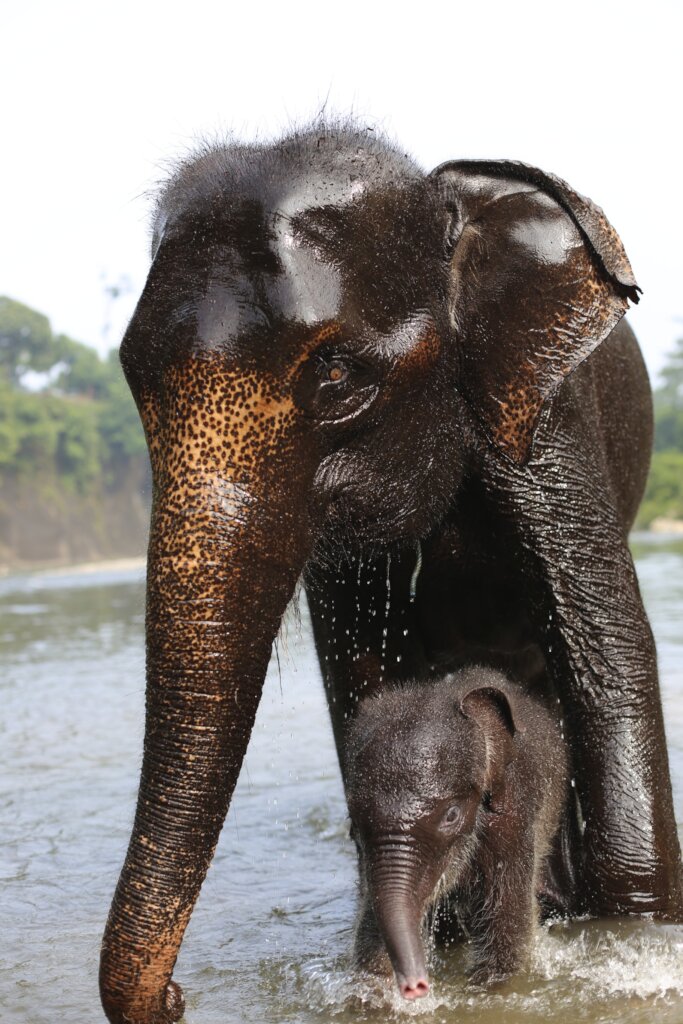 Sumatra elephants in a sanctuary in Sumatra.

Sumatran elephants, like Sumatran orangutans, are Critically Endangered. They were given this status in 2012 after losing half their population in just ten years.

Similarly to orangutans, the elephants are threatened by habitat loss - these large-bodied mammals need a lot of space and many trees and plants to survive in the wild. However, for elephants, poaching is also a threat, with a recent court case seeing 11 people jailed for their role in killing elephants in Sumatra's Aceh province to harvest their tusks for the illegal wildlife trade.

With an estimated 2,400-2,800 individuals left in the wild, tackling wildlife crime is vital for Sumatran elephants. This encompasses not only tackling the direct crime against them (poaching for their tusks), but also things like traps and snares which, despite being set for deer and wild pigs, can also harm elephants which share their habitat.

This, combined with habitat restoration, is key to the elephants' survival. Thank you for helping to tackle wildlife crime in Sumatra.

Make a monthly donation & get matched today at 100% while funds remain. Terms and conditions apply.
Give the gift of stability in a time of instability. Set up an automatic, monthly gift now and get matched at 100%—because the COVID-19 pandemic has hurt us all, and it will take all of us to overcome it. Terms and conditions apply.
Monthly giving is as easy, safe, and as inexpensive as a Netflix subscription. Start a monthly donation to Sumatran Orangutan Society today and get matched at 100%. Terms and conditions apply.
$10
USD
monthly
will provide consistent income for vehicle maintenance, keeping the rangers safe as they move around the country
›
$15
USD
monthly
will add up, over a year, to enough to pay a ranger for a month
›
$20
USD
monthly
will enable us to keep the rangers' field equipment up to date
›

GlobalGiving
Guarantee
Donate https://www.globalgiving.org/dy/cart/view/gg.html?cmd=addItem&projid=26328&rf=microdata&frequency=ONCE&amount=25
Please Note
WARNING: Javascript is currently disabled or is not available in your browser. GlobalGiving makes extensive use of Javascript and will not function properly with Javascript disabled. Please enable Javascript and refresh this page.