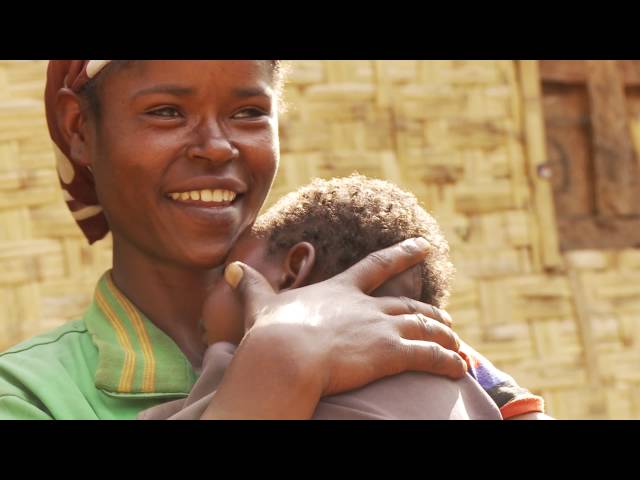 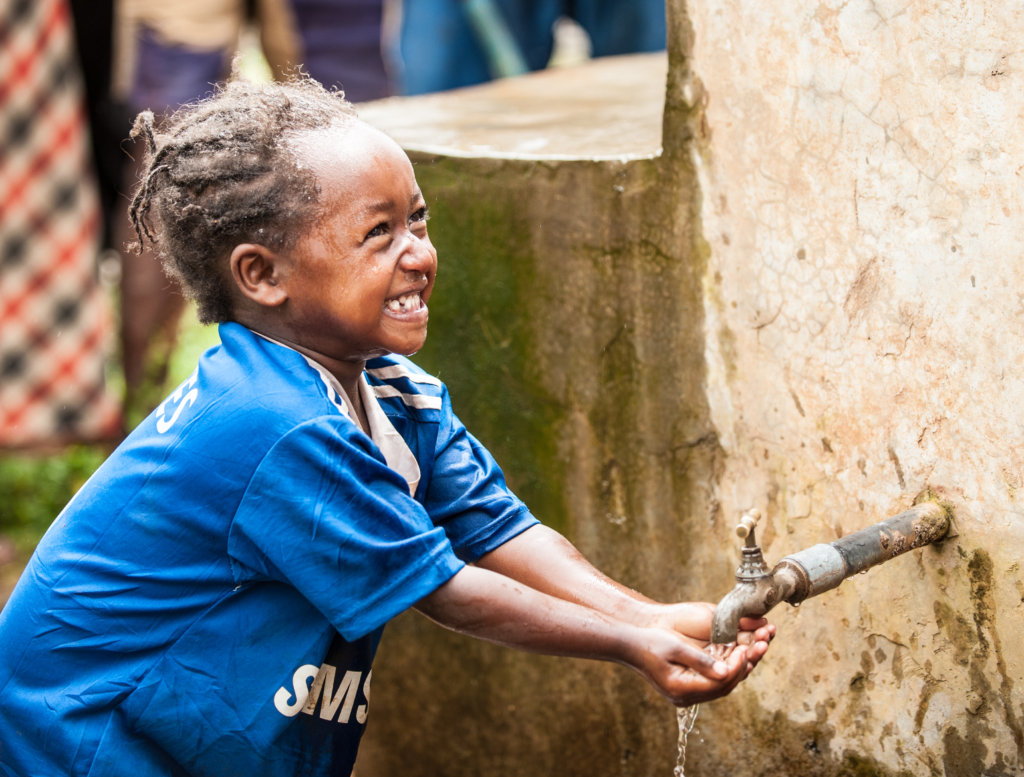 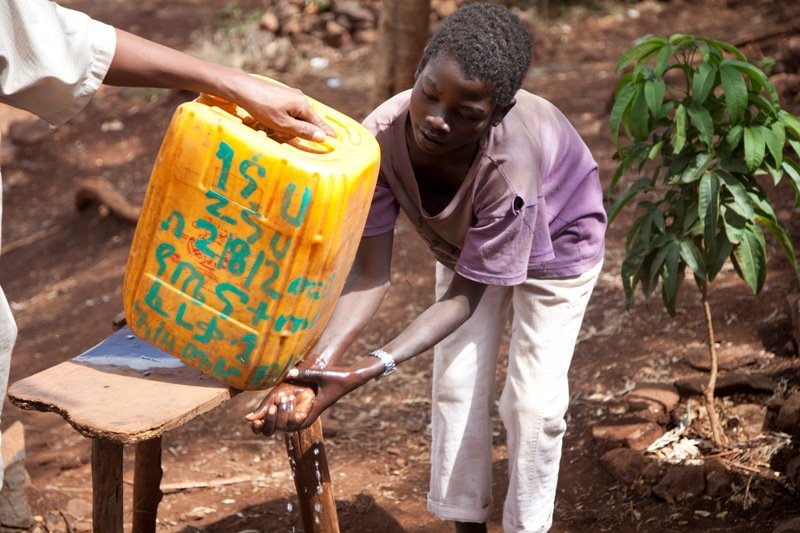 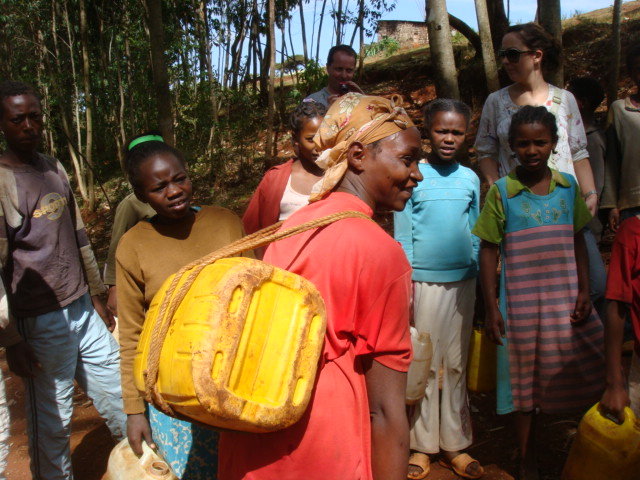 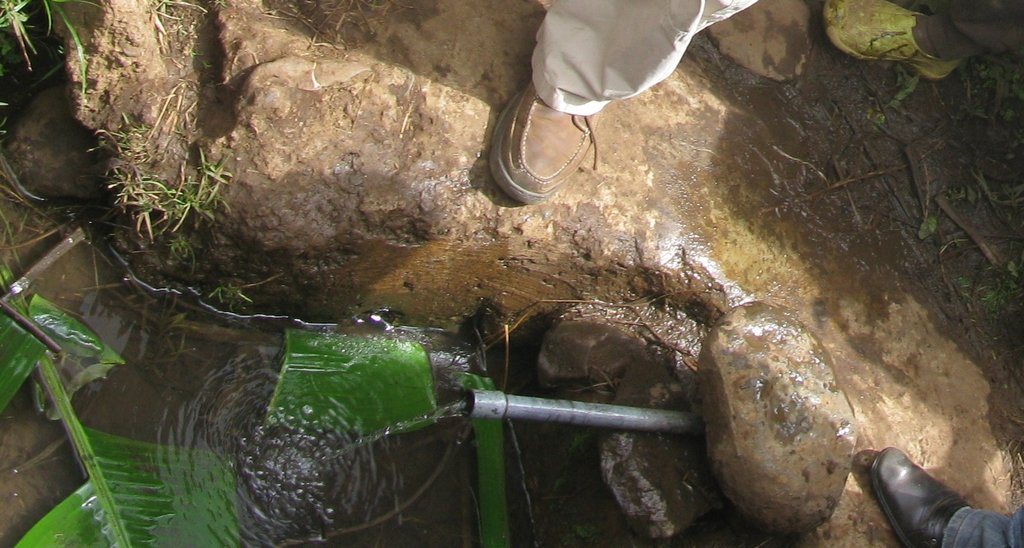 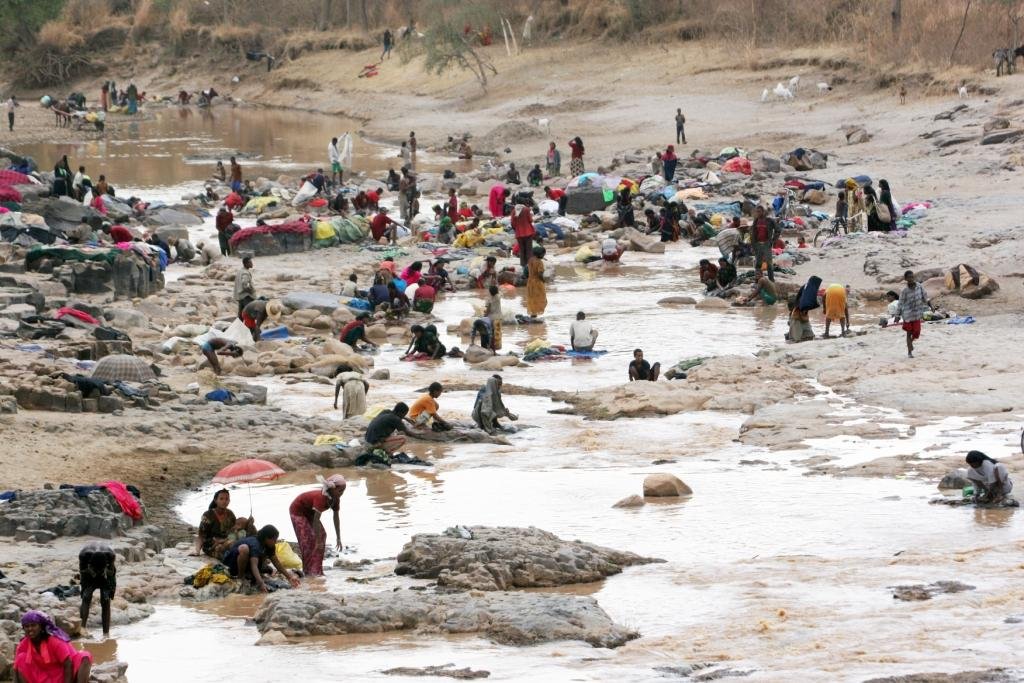 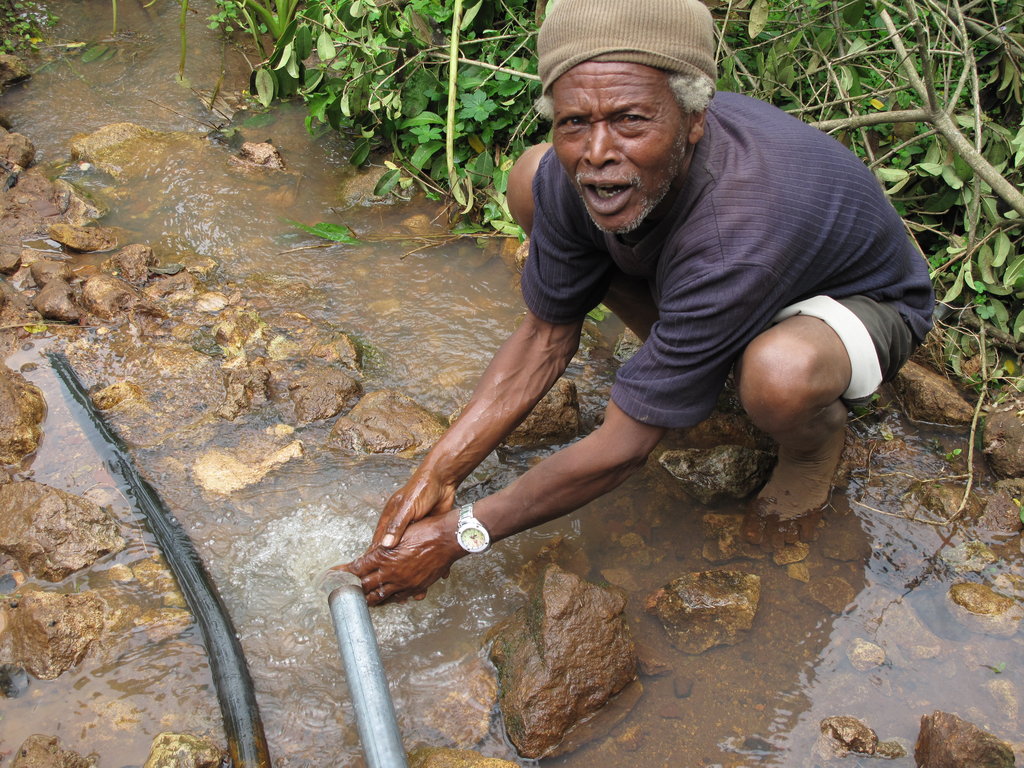 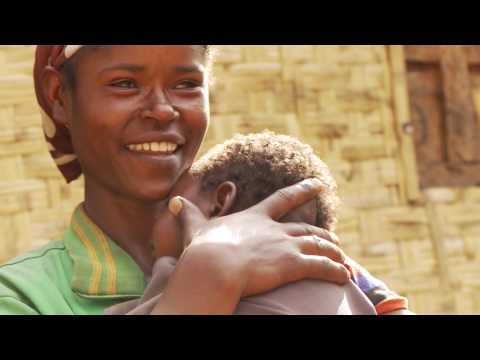 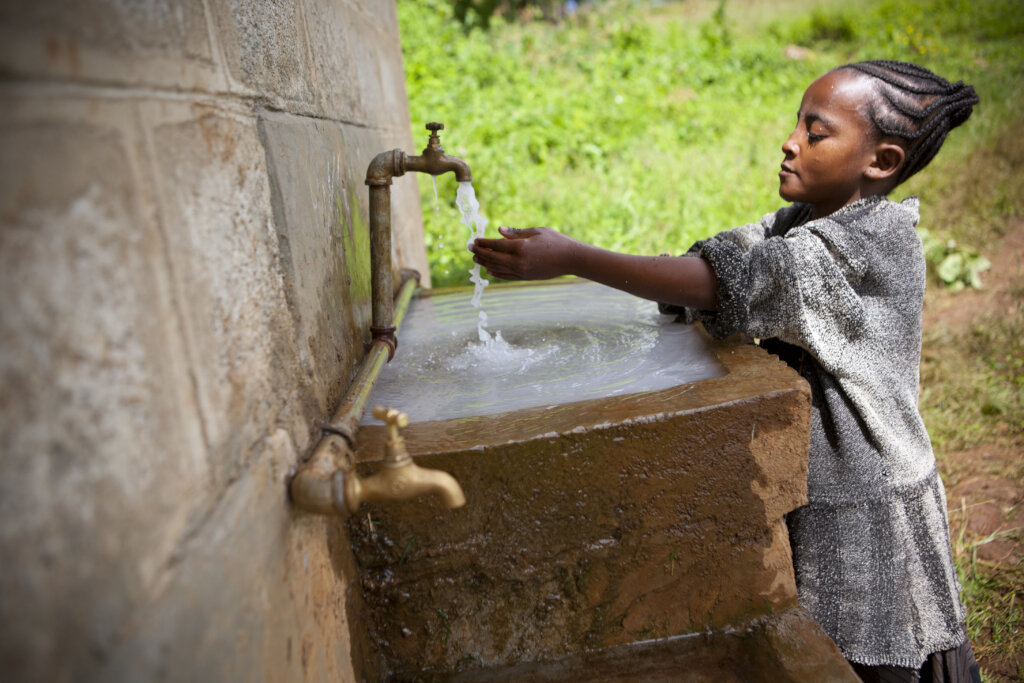 School-based facial cleanliness and environmental improvement is part of part of a behavioral change intervention. Not only do the students have access to clean water and sainitaty stations, but they also learn on how to prevent transmission of preventable eye deseases.

The construction of four pending school latrines has been completed in Chaba Beles (Gamo zone) and Dombe (Gofa zone) primary schools. The design of the latrines is inclusive for all students with disabilities, children friendly with handwashing facilities. These latrines were constructed  in partnership with Gamo and Gofa zone’s Education & Urban Development and Construction Departments and will  benefit a total of 1973 students. 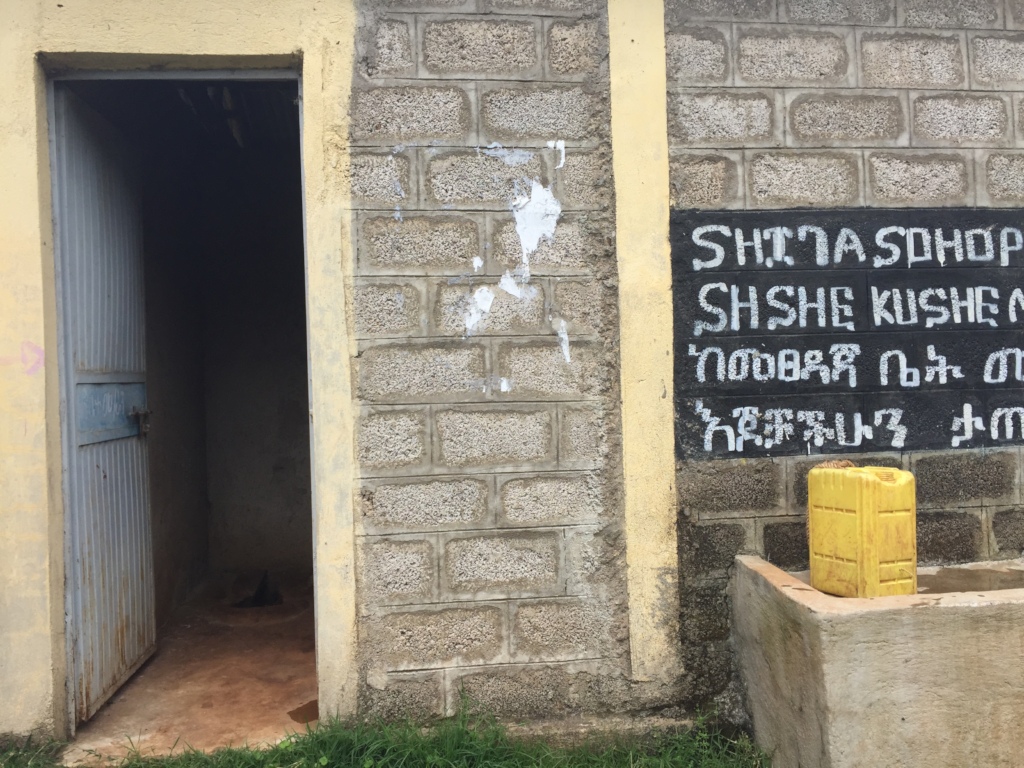 As a pivotal element of the SAFE strategy for trachoma elimination, providing community access to sanitation facilities is a high priority for our staff in Ethiopia. Access to water allows for good hygiene practices. And good hygiene practices, such as face- and handwashing, play a crucial role in combating trachoma because of its highly contagious nature. That is why Orbis has supported the construction of communal and school latrines as well as protected water points in the southern region of Ethiopia.

Thanks to your generous donations, we recently were able to implement separate latrines for girls and boys at a primary school. This allows the students to carry out basic hygiene practices. Additionally, it creates awareness about trachoma and the importance of handwashing. Orbis supports many eyes care clubs in schools in the SNNP region of Ethiopia. As an awareness projects, on parents’ day, the students held workshops on the importance of personal hygiene for their community outside of school.

Over the past 22 years, Orbis Ethiopia, in collaboration with local partners, has constructed a total of 126 latrine blocks and installed 36 water points throughout communities and schools. This would not have been possible without your support. Thank you very much! 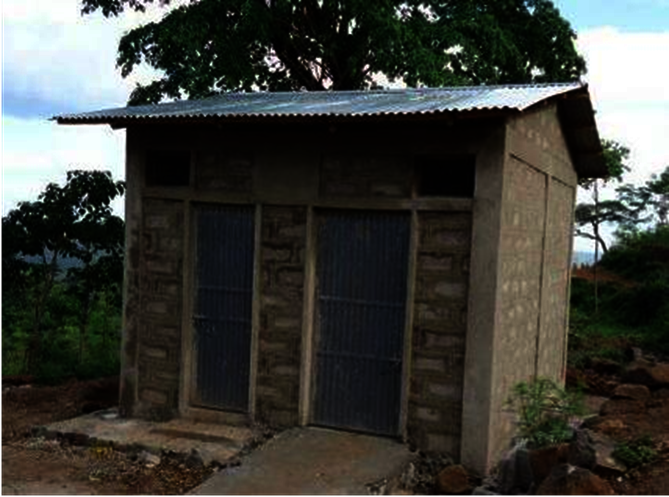 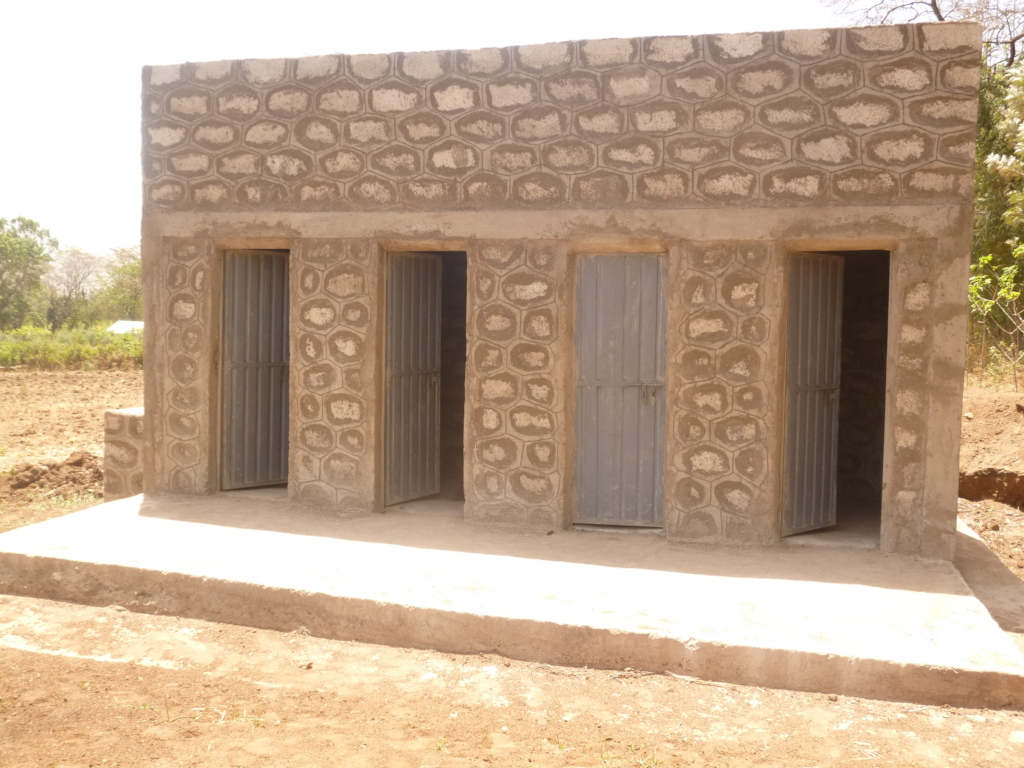 How Orbis Volunteers Save Sight 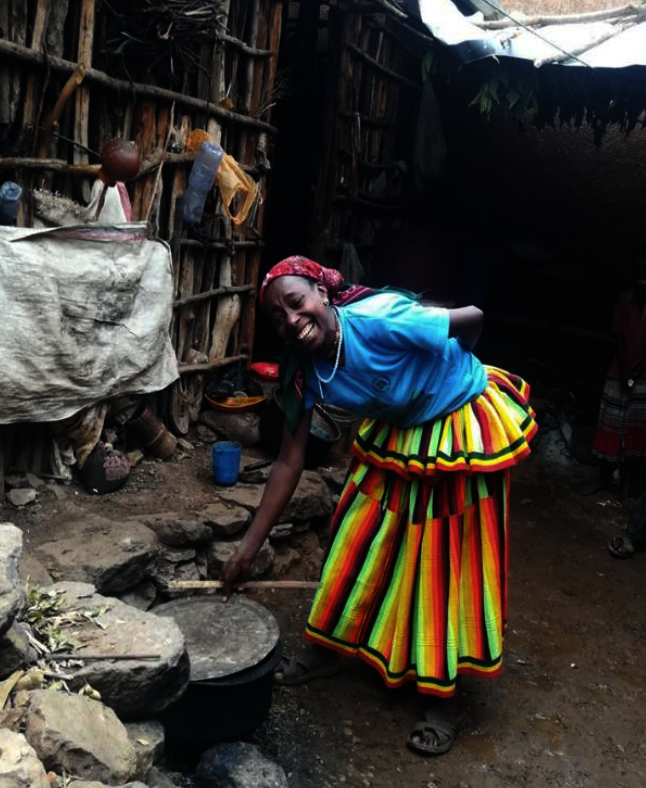 Nearly two million people around the world are blind or have visual impairment due to trachoma, a painful bacterial eye infection. If left untreated, trachoma can lead to trichiasis, an even more excruciating and severe condition. Thanks to you more people in Ethiopia are free from the pain and fear of trachoma—thank you!

Ten years ago, Amarech started to feel excruciating pain in both of her eyes. She noticed that opening and closing her eyes was becoming extremely uncomfortable. To reduce the pain, she was using a local eyelash-picking material called ‘worento’ for temporary relief. But Amarech’s untreated eye condition was starting to have more serious long-term effects. She became hypersensitive towards the light, couldn’t work, and stopped seeing friends and family.

As someone who had been very proud of her work—preparing a local drink called ‘Cheka’—Amarech was left feeling defeated and unable to provide her family with the income they needed. Her son pitched in to help by working longer days on the family farm. But his studies suffered as a result, and the family knew this couldn’t be a long-term solution.

Another woman in a nearby community, Beyenech, was also suffering from the same symptoms. Like Amarech, she also had to stop attending social gatherings and couldn’t do her daily work on the family farm. Beyenech had tried medications she received from nearby health facilities, but there was no improvement.

Thanks to Orbis supporters like you, Amarech and Beyenech were both visited by a case finder named Ato who had been trained by Orbis. Because many people are confined to their homes due to the COVID-19 pandemic, Orbis has been conducting door-to-door visits to ensure people who need eye care can still receive it.

During the visits to the homes of Amarech and Beyenech, Ato saw that both women were suffering from trichiasis, caused by repeat trachoma infections. Ato referred each of them to a nearby health centre where they could receive the surgery they needed. Both women were at risk of losing their sight altogether if they didn’t receive treatment fast.

Trachoma is one of those most prevalent Neglected Tropical Diseases and a major focus of Orbis’s work around the globe, particularly in rural Ethiopia, where the condition persists, and eye care can be difficult to access. With your continued support, our goal is to eliminate this leading cause of blindness around the world.

Following Ato’s advice, Amarech and Beyenech received bilateral surgery on their upper eyelids, and the procedures were very successful. Both women are thrilled to be able to see clearly again. Now, they are able to work, provide for their families, and socialize free of fear and pain! 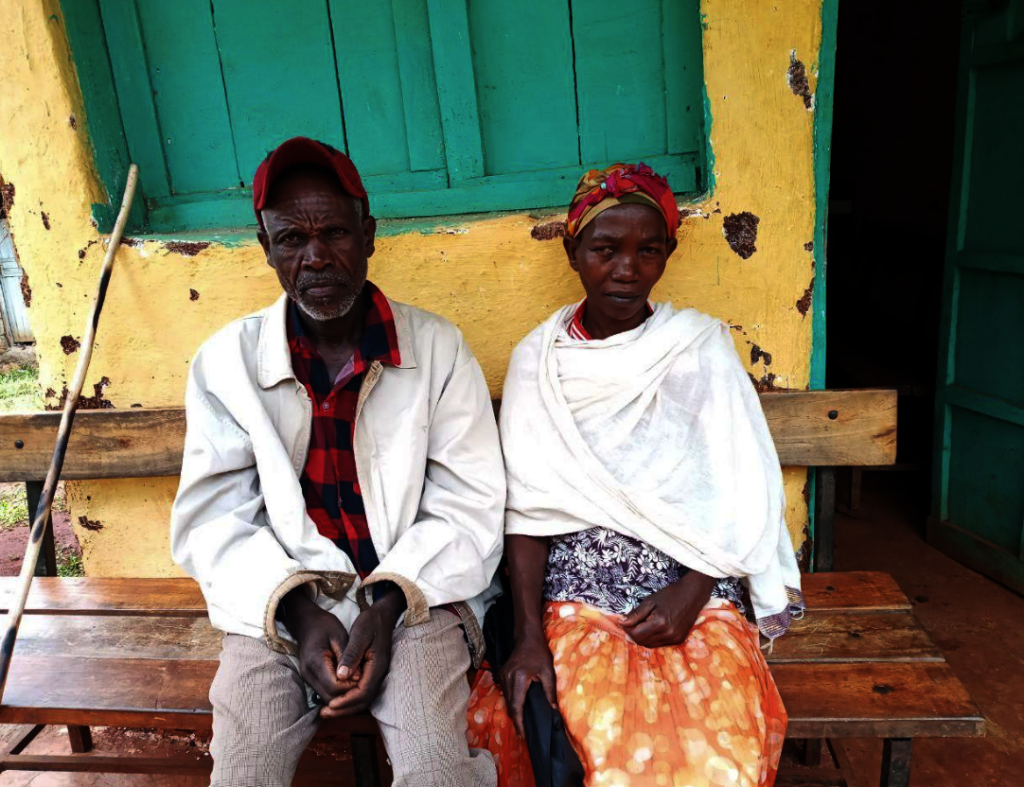 Beyenech (suffering with the pain of trachoma) 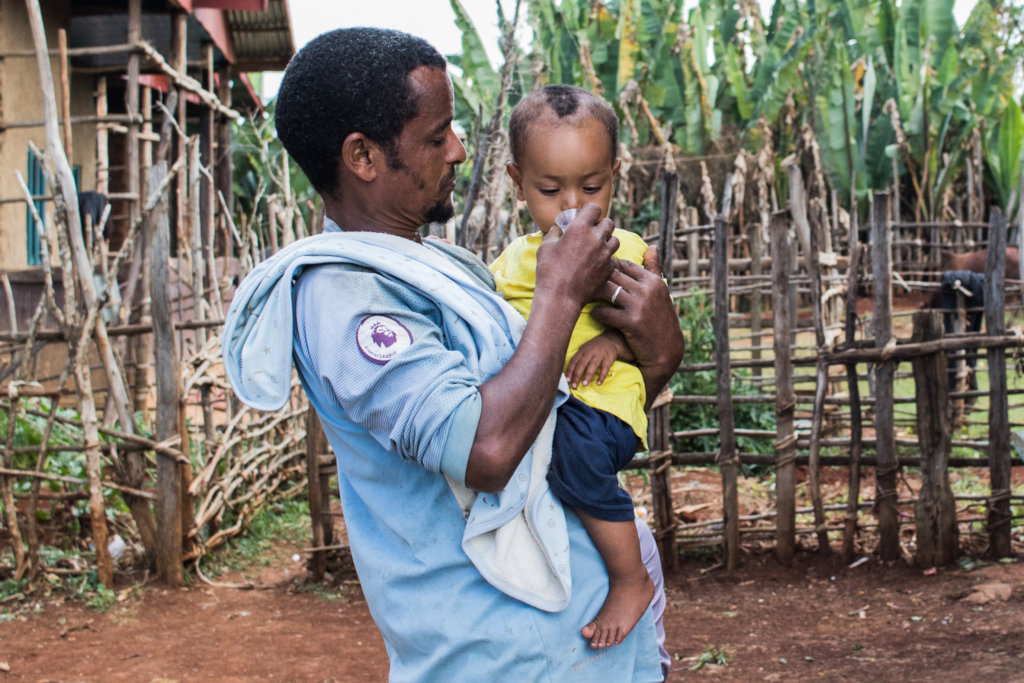 Shemsedin gives his daughter the antibiotic

The pandemic severely impacted eye health services in Ethiopia. And after months of restrictions, Orbis partner hospitals and clinics were able to resume our eye health services. But we faced challenges in adaptation, both in health facilities and in community outreach programmes, so we could operate in a Covid-secure manner.

It wasn’t until the final quarter of 2020 when we were in the position to fully begin supporting eye health facilities so trachoma trichiasis and cataract surgery and other services could be provided.

Unfortunately, if someone's eye condition is not identified early enough, it can lead to irreversible visual impairment or even blindness – which in turn can create a cycle of social exclusion, emotional trauma and economic hardship.

In Ethiopia, specialist skills and knowledge of eye health is in demand and Orbis needs to be there to provide those skills. We need to work with governments, schools, communities and eye health professionals to screen and treat those who need us, to create brighter futures.

Shemsedin is a farmer from southern Ethiopia. He watched his grandparents lose their sight due to trachoma and, at that time, nothing could be done to help them. His generation, and that of his 11-month-old daughter, have been spared the same fate through the educational efforts of Orbis, and the medicine and treatment they provide within his village.

Shemsedin and his daughter, Hamdia, both received the antibiotic to prevent trachoma infection during a house-to-house mass drug administration programme by Orbis. They were just two of almost a million people who received the drug in the area.

The past 18 months brought new health challenges to this community in the form of the Covid-19 pandemic. Thanks to the hygiene education and initiatives put in place by Orbis, Shemsedin feels more prepared for tackling trachoma and Covid-19.

"In the past, our parents struggled with their vision because of trachoma. Most of us have some family members who lost their eyesight." Shemsedin

We’re only able to continue reaching people like Shemsedin and his daughter, particularly amid the pandemic, thanks to the incredible support we receive. 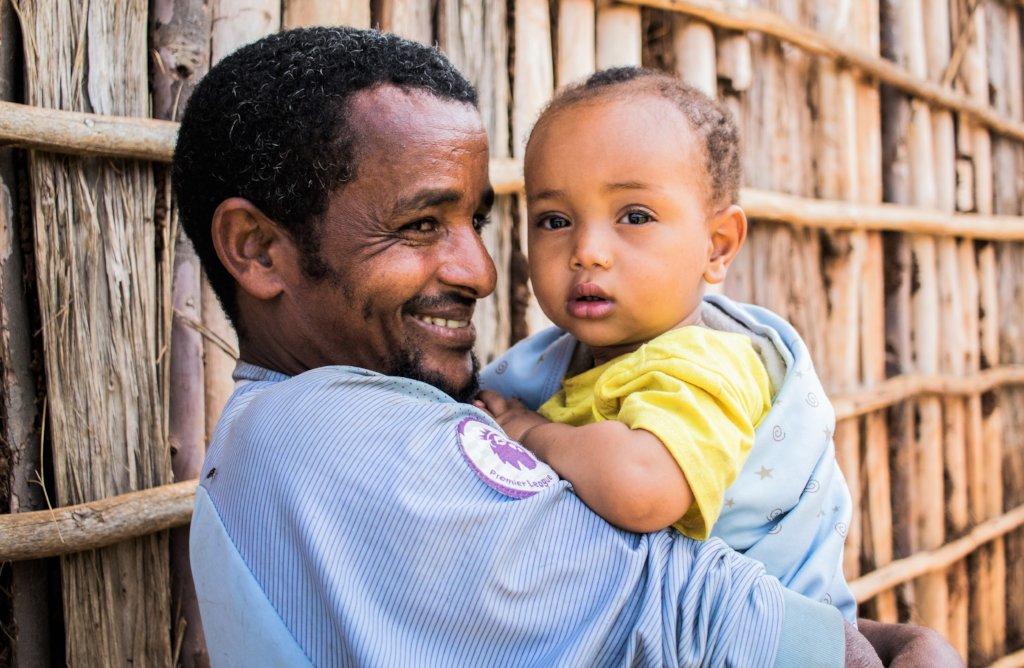 Shemsedin gives his daughter the antibiotic

How Covid-19 has affected the work of Orbis 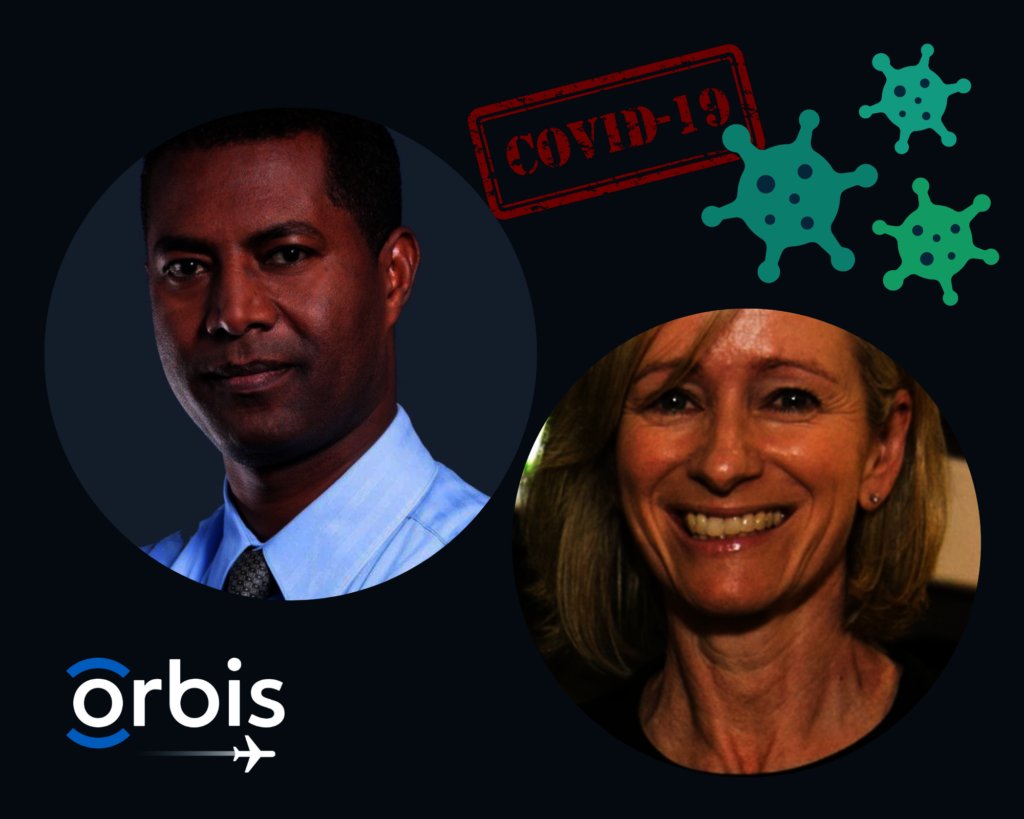 Earlier this month, Clare O’Dea, Board Director of Orbis Ireland, spoke to Alemayehu Sisay, the Country Director for Orbis International Ethiopia.  Alemayehu is an Ophthalmologist and a public health expert and has worked with Orbis for the last 18 years.

Clare asked Alemayehu about the current Covid restrictions in Ethiopia and how they have affected the work of Orbis in the country.

Alemayehu explains how Orbis’s innovative culture has allowed us to quickly adapt in response to COVID-19 and he explains how our work has been forced to change.  He points out how the health messaging around Covid-19 is very similar to that of trachoma and how this is a positve aspect of the restrictions.

You can watch the interview by clicking the link below.

Project Leader:
Diane Weatherup
Dalkey, Dublin Ireland
$11,426 raised of $15,000 goal
You last donated to this project on
174 donations
$3,574 to go
* Amounts in US Dollars
Donate Now
Donate once
Donate monthly
$10
USD
will contribute towards the cost of raw materials
›
$20
USD
will contribute towards the cost of labour for the project
›
$579
USD
will build one water pump serving 100 households
›
$5,790
USD
will build ten water pumps serving 1000 households
›

Donating through GlobalGiving is safe, secure, and easy with many payment options to choose from. View other ways to donate
Orbis Ireland has earned this recognition on GlobalGiving:

GlobalGiving
Guarantee
Donate https://www.globalgiving.org/dy/cart/view/gg.html?cmd=addItem&projid=8454&rf=microdata&frequency=ONCE&amount=25
Please Note
WARNING: Javascript is currently disabled or is not available in your browser. GlobalGiving makes extensive use of Javascript and will not function properly with Javascript disabled. Please enable Javascript and refresh this page.