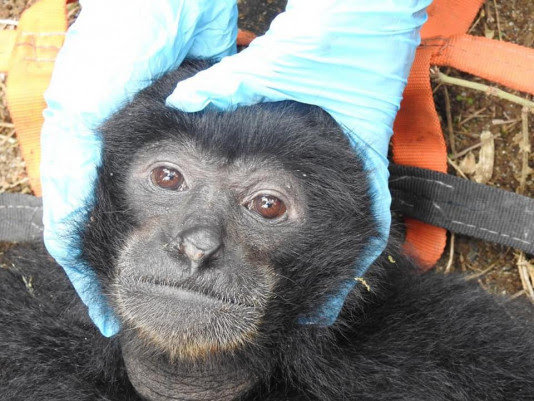 Although most of the rescue team's work is with orangutans - they are often called to evacuate adult orangutans from plantations or farmland, and also confiscate baby orangutans from the illegal pet trade - this doesn't mean they won't help other species in need, and the siamang in the photo above is just one recent example. She had been seen repeatedly by residents of a village in Aceh province, but these same residents initially felt that the team didn't need to get involved as they didn't see the siamang as a problem. After a few weeks, though, the siamang started to change her behaviour in response to being around humans, and eventually started trying to take food from local shops. To avoid more serious conflict developing, and to protect the siamang's health, the team tranquilised and evacuated her, taking her to a wildlife rehabilitation centre for eventual release back into the wild.

“Our team can’t just sit around if anyone needs our support. We will help other wildlife as best as we can so they can roam free back into the wild. On many occasions, our team has actively participated to mitigate wildlife conflicts with animals such as elephants, sun bears, slow lorises, eagles, and gibbons” - Jenny, rescue program manager

A few days after evacuating the siamang, the team received a report about a female orangutan who was stranded in a plantation in another part of Aceh. When the team reached her, they realised she was 13km (just over 8 miles) away from the nearest patch of forest. Despite this, the orangutan - later named Sofi - had no health problems, so the team released her into the forest later that day.

Thank you for supporting the team to help orangutans and other wildlife in Sumatra. 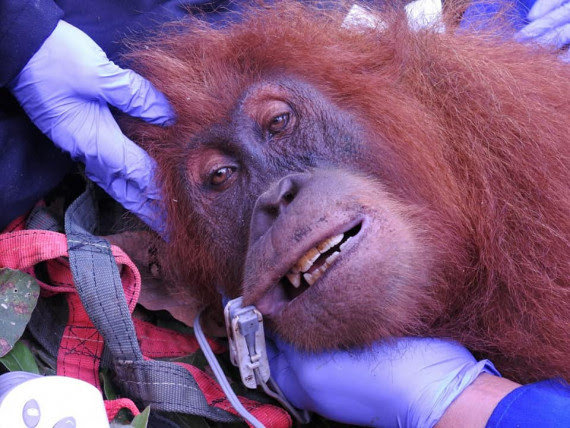 Project Leader:
Lucy Radford
Abingdon, Oxon United Kingdom
$63,683 raised of $100,000 goal
You last donated to this project on
1,225 donations
$36,317 to go
* Amounts in US Dollars
Donate Now
Donate once
Donate monthly
$25
USD
could buy a set of tranquiliser darts so that we can safely evacuate an orangutan
›
$75
USD
could buy veterinary supplies to help treat orangutans in the field
›
$95
USD
could buy a full uniform and kit for a member of the rescue team, who often spend several days at a time in the field in harsh conditions
›
$125
USD
could keep the team's vehicle on the road for a month, vital for reaching orangutans in danger
›
$385
USD
could buy an orangutan transport cage, helping us safely move animals to be released back to the wild
›