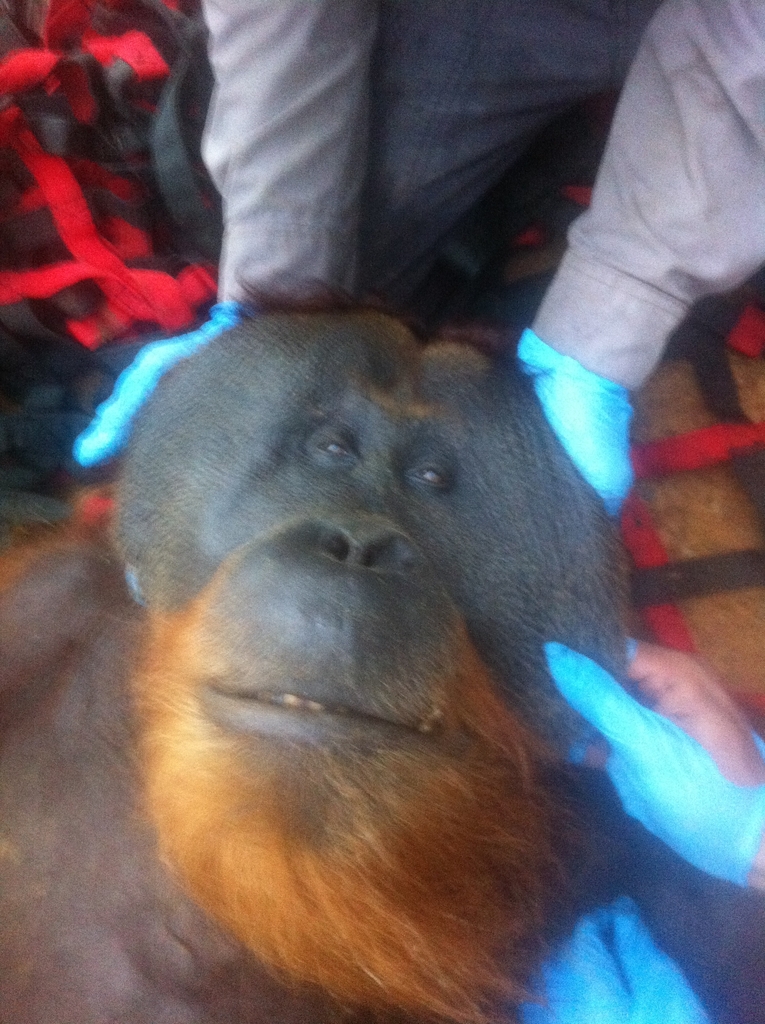 The orangutan is tranquilised & given health check

The evacuation was carried out by the Orangutan Information Centre's HOCRU team (Human Orangutan Conflict Response Unit) along with support from the Indonesian government's BKSDA team.

The orangutan was a large cheekpadder,  estimated to be 30 years old. Local people reported that the adult male orangutan and a few other orangutans had been in their village for a long time, cut off from the forest by an oil palm plantation.  Villagers from Karya Jadi told the rescue team that the orangutan had damaged their crops and had even chased local farmers in their rubber plantations. The farmers had threatened to kill the orangutan unless he was relocated, as their feared for their lives and their livelihoods.

The orangutan was safely tranquilised and brought down from a rubber tree, then given a thorough health check by the OIC's vet, Dr. Ricko. The government authority approved the immediate release of the orangutan back into the forest, so he was transported to the forest restoration site within the Gunung Leuser National Park, part of the Leuser Ecosystem, and released the same day.

All evacuations of this nature are inherently high-risk for the orangutans and the rescue team, and are only carried out as a last resort if the orangutan's life is in greater danger if not relocated. SOS and OIC work hard to protect Sumatran orangutans and secure a future for them in the wild through conservation programmes and campaigns that keep their forest home safe.

Thank you so much for supporting this vital work, your donations to the rescue team mean that they can help more orangutans in danger and give them a second chance at life in the wild. 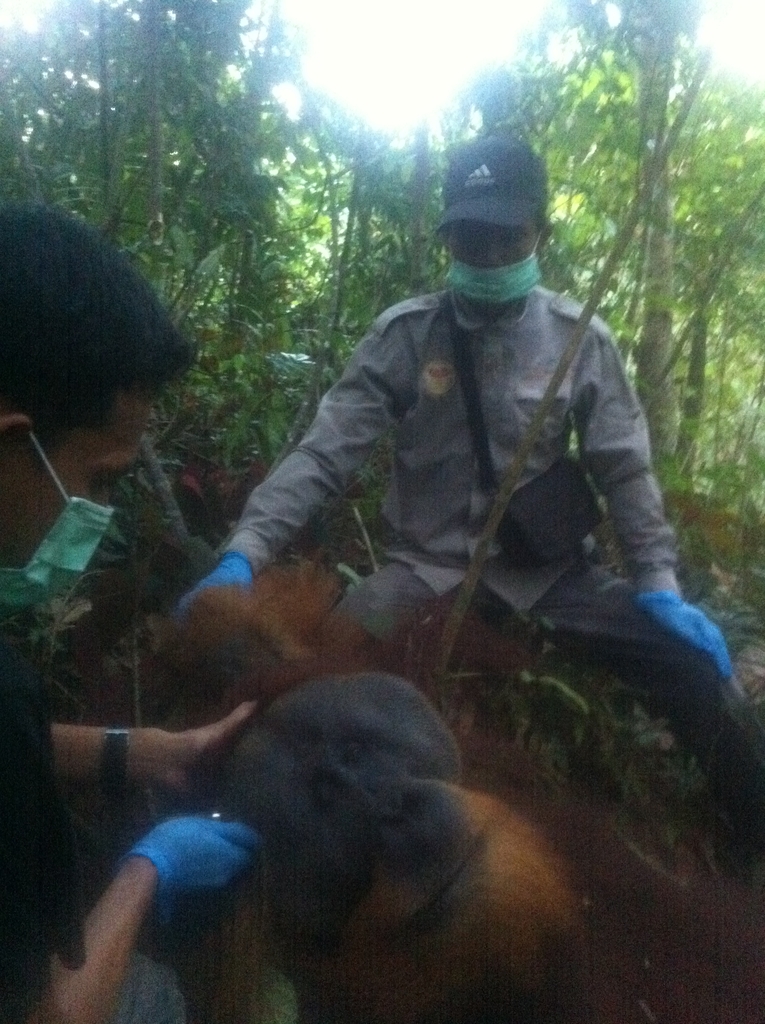 The rescue team check the orangutan for injuries 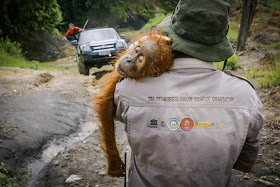 The Human Orangutan Conflict Response Unit (HOCRU) has been featured in a primetime BBC documentary, Wonders of the Monsoon.

Paul Williams and Jon Clay, members the crew who filmed with our team, have written an excellent blog post about the experience.

"At the end of this episode we feature, what for me, was one of the most emotional shoots I have ever done. I joined cameraman and producer Jon Clay to help document the story of a select group of people, part of the Sumatran Orangutan Society, who have dedicated their lives to protecting and rescuing one of our closest cousins - the Sumatran orangutan. My primary role was to document the shoot for our 'behind the scenes' section that follows the main show. The result is a sequence that I hope will inspire you to stop and think."

You can read the rest of their account and watch some emotional behind the scenes footage online (see link below).

Thank you for helping us to reach these orangutans in danger, on behalf of the HOCRU team.

Five orangutans rescued in a month 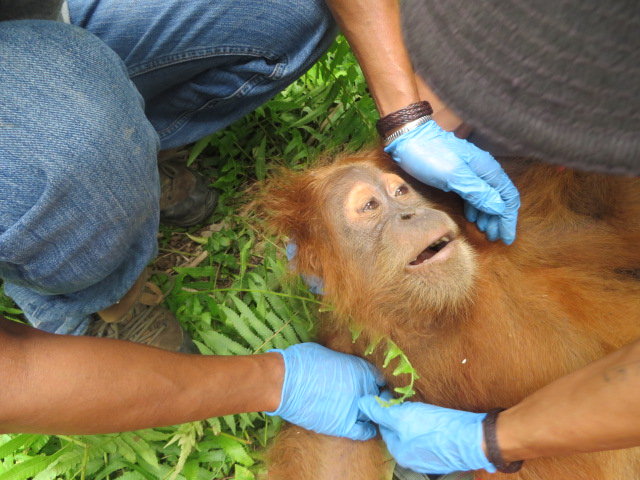 This male orangutan had been kept as a pet

The team in Sumatra have been incredibly busy lately, with several reports of orangutans in danger.

One of these orangutans was a five year old male, found roaming in farmlands. When the rescue team arrived on the scene, they discovered that he has escaped from life as a pet about a year ago - he was still wearing the rope around his neck from where he'd been tied up. It is illegal to keep orangutans as pets, as they are a protected species under Indonesian law, but sadly we are regularly involved in rescuing captive orangutans, which must then go through a lengthy process of rehabilitation before they can be returned to the wild.

Shockingly, in this case, the orangutan's 'owner' had been a government worker - in fact, keeping protected species as pets is seen as a status symbol, and some government officials and members of the police wish to show they are above the law by doing so.

Another of the orangutans who was rescued recently was a 10 month old baby, who the rescue team named Pepe. He was also being kept as a pet, and was severely dehydrated and starving. The people in the village said that he had been found on the ground, but this is incredibly unlikely - orangutan mothers and their babies have one of the strongest bonds in the animal kingdom, and it is far more likely that Pepe's mother would have been killed than have abandoned her son. Pepe was rushed to the Sumatran orangutan rehabilitation centre and is undergoing treatment, getting stronger every day.

It is only through donations that we are able to keep the rescue team on the road - without them, so many orangutans in danger would have a grim fate, but thanks to this project, instead have a second chance at life in the wild. Please consider setting up a regular monthly gift, or sharing our work with your family and friends.

Returning orangutans to the wild 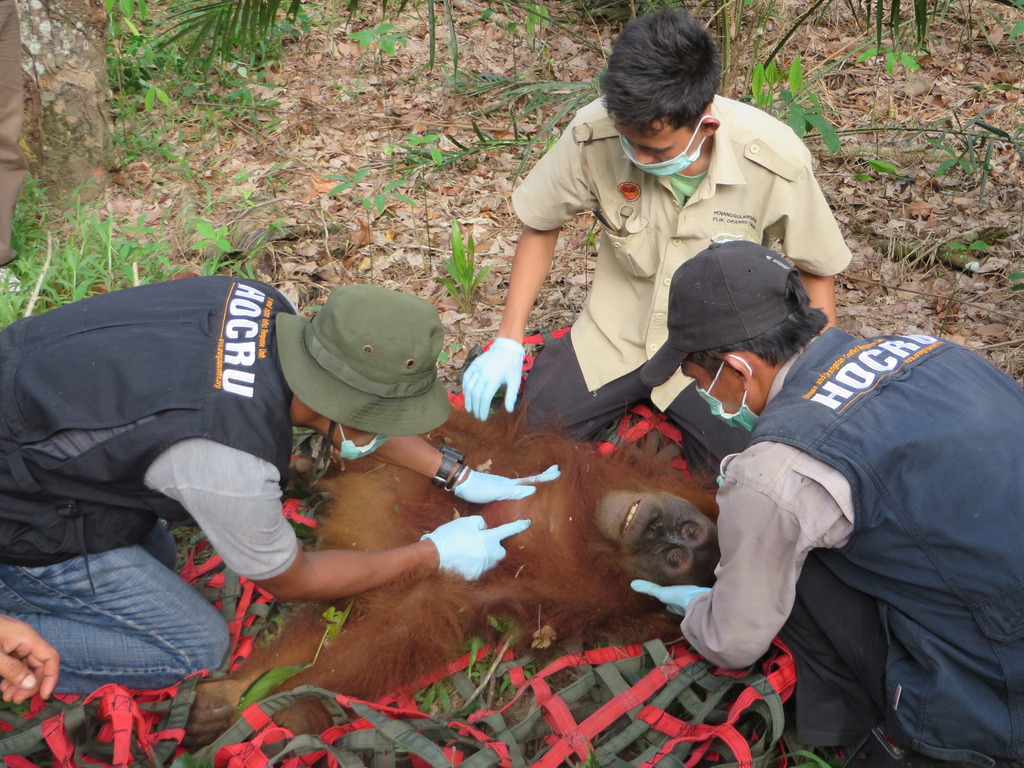 The HOCRU team working on the sedated female

Every Sumatran orangutan counts when the population is dwindling and habitat is fast disappearing. Our expert team in Sumatra has rescued and relocated 47 orangutans since it was set up in 2010.

The most recent rescue in mid June was of a 12 year old female, which had become stranded in a rubber plantation in Aceh Tamiang without enough to eat. The area had been severed from the rainforest so she was not able to return on her own, and there was a risk of conflict with local human populations. Our Human Orangutan Conflict Response Unit moved in quickly, sedated the orangutan and carried out a health check. Once satisfied she was fit enough, they returned her to the rainforest.

If an orangutan isn't able to be returned to the wild directly they will be taken to the Sumatran Orangutan Conservation Program, where they are cared for until they are able to be relocated. This includes many babies whose mothers have been killed. Wild born orphans which have been through the rehab system now form a significant part of the wild orangutan population in both Sumatra and Borneo.

Forest loss is the biggest cause of orangutans being displaced and the rate of loss is not expected to decrease in the near future. SOS is determined to fight for every orangutan's right to live in the wild.

Please support SOS on Global Giving's bonus day - July 16th. Your donation will be matched up to 40%. Matching begins at 9am EDT and ends at 11.59 EDT so if you can give between those times it will be a HUGE help. Thank you. 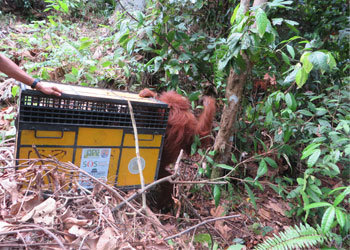 The orangutan returns to the wild 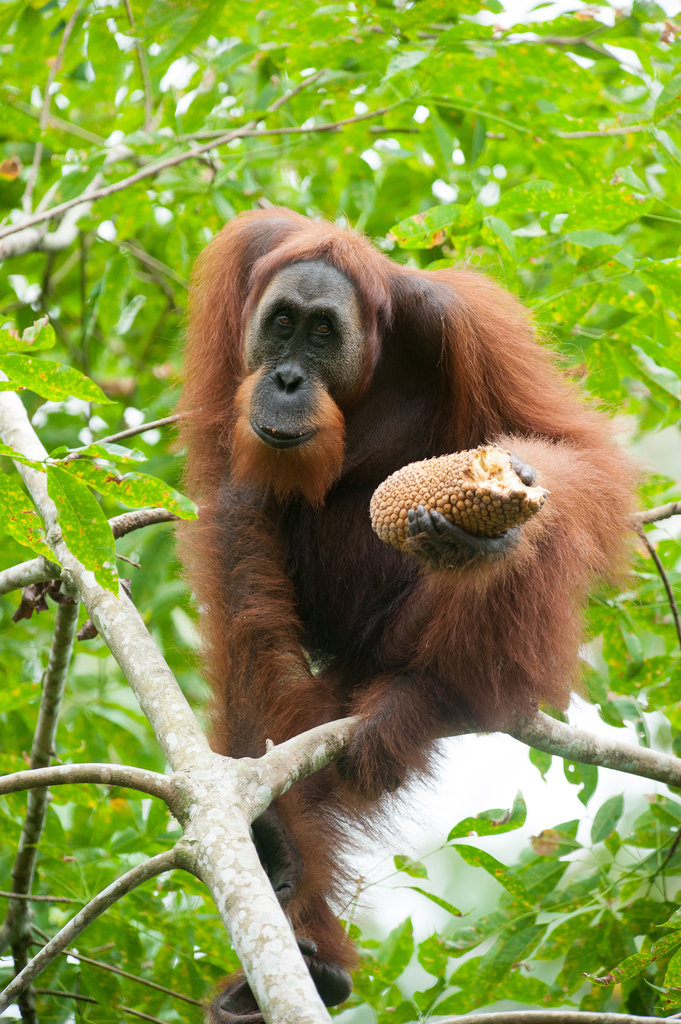 The orangutan before it was captured

Sadly, human-animal conflicts are an all-too-common occurrence in Sumatra, especially in areas of secondary or degraded forest. But thanks to the unflagging efforts of the Human Orangutan Conflict Response Unit (HOCRU), not all of these conflicts end in tragedy.

A few days ago the team evacuated an 18 year-old male orangutan from the Litur area in the Langkat district of North Sumatra. This orangutan was reported to have been consuming petai (Parkia speciosa) – popularly known as the ‘stink bean’ and used widely in Indonesian cuisine – from people’s farmlands as it was the fruiting season. Wanting to protect their lands and livelihood, some of the local villagers made threats on this hairy interloper’s life. Fortunately, however, the HOCRU team was able to bring him down without any incident and transfer him immediately to the Sumatran Orangutan Conservation Programme (SOCP) quarantine centre outside Medan. He will remain here for about 30 days before being released back into the wild via the Jantho Reintroduction Programme, which is also managed by SOCP.

Many more orangutans end up in similar situations, and not all of them emerge unscathed. HOCRU does vital work - not only in saving these orangutans but also in helping to reconcile local communities’ needs with those of Sumatra’s unique wildlife. Your support is crucial in keeping them going. Please spread the word about their important work or make a donation to the team today! 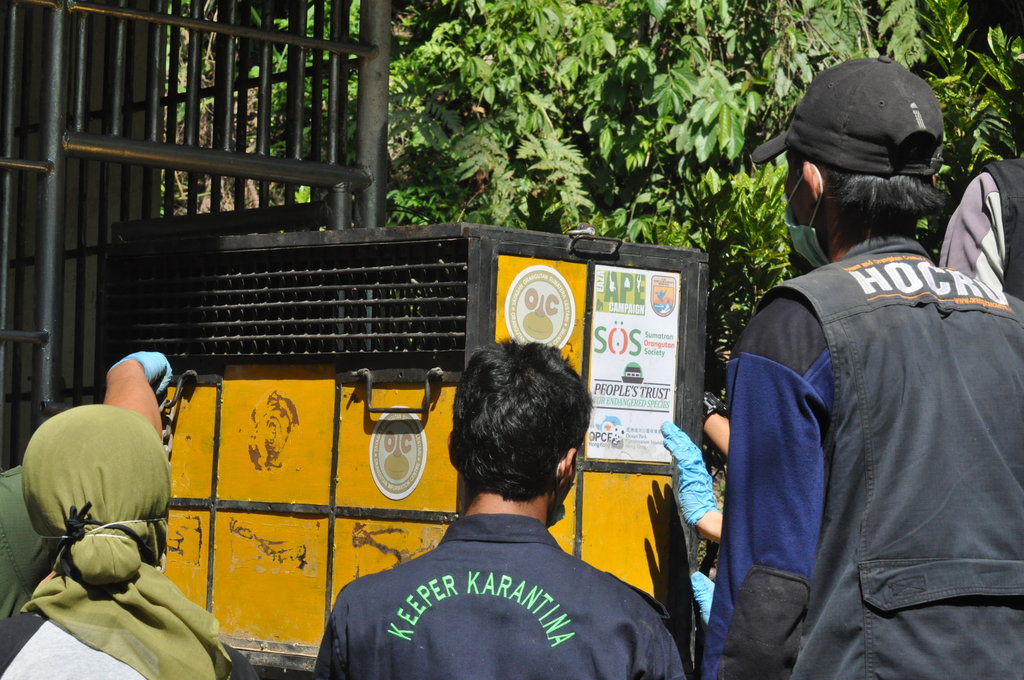 Transfer to the quarantine centre

Project Leader:
Lucy Radford
Abingdon, Oxon United Kingdom
$62,656 raised of $100,000 goal
You last donated to this project on
1,201 donations
$37,344 to go
* Amounts in US Dollars
Donate Now
Donate once
Donate monthly
$25
USD
could buy a set of tranquiliser darts so that we can safely evacuate an orangutan
›
$75
USD
could buy veterinary supplies to help treat orangutans in the field
›
$95
USD
could buy a full uniform and kit for a member of the rescue team, who often spend several days at a time in the field in harsh conditions
›
$125
USD
could keep the team's vehicle on the road for a month, vital for reaching orangutans in danger
›
$385
USD
could buy an orangutan transport cage, helping us safely move animals to be released back to the wild
›