Advancing education and opportunity through Rugby

by The ATLAS Foundation 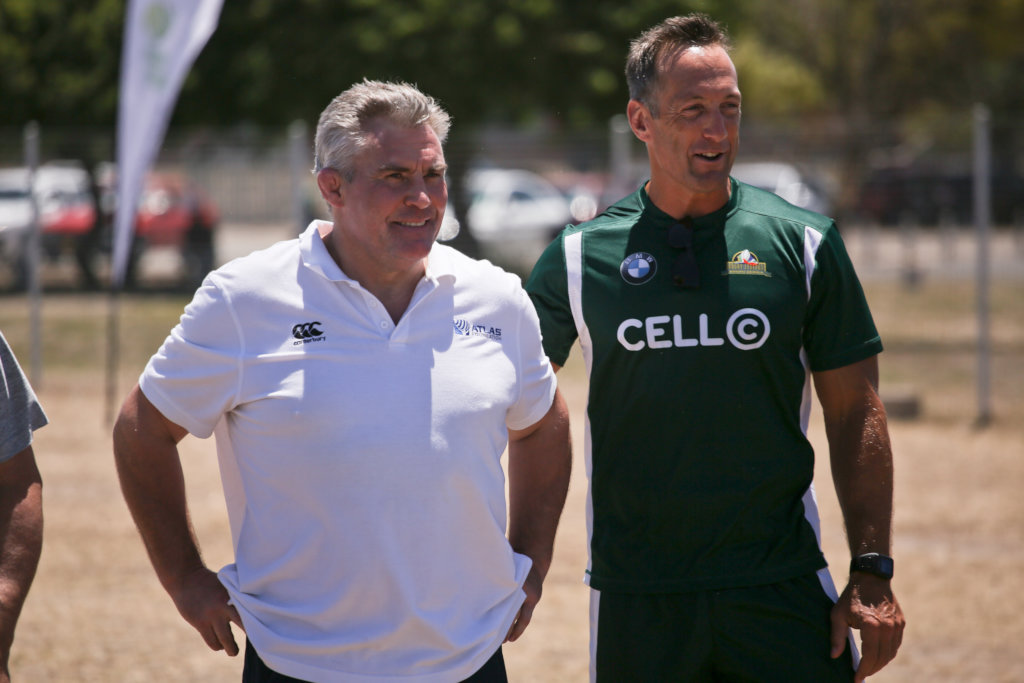 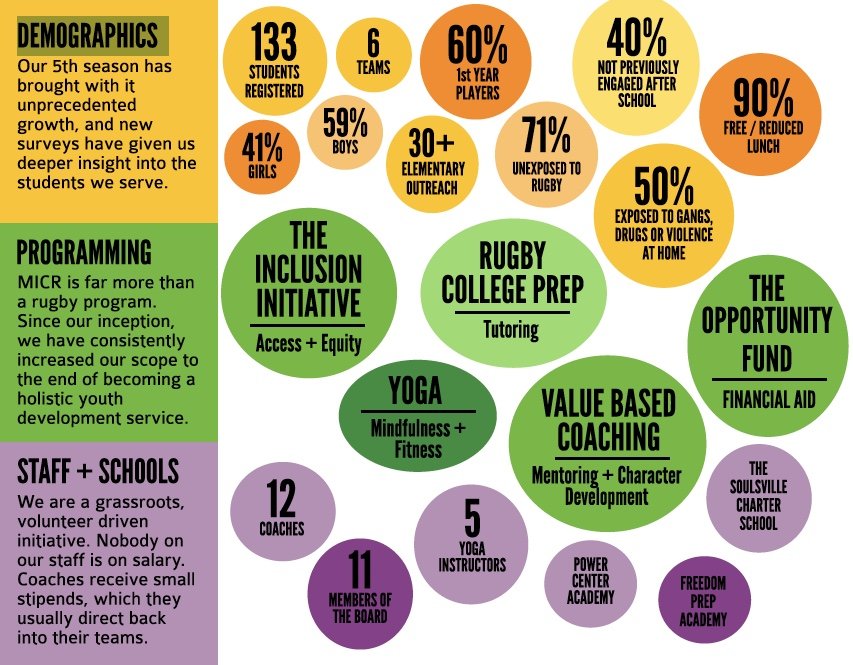 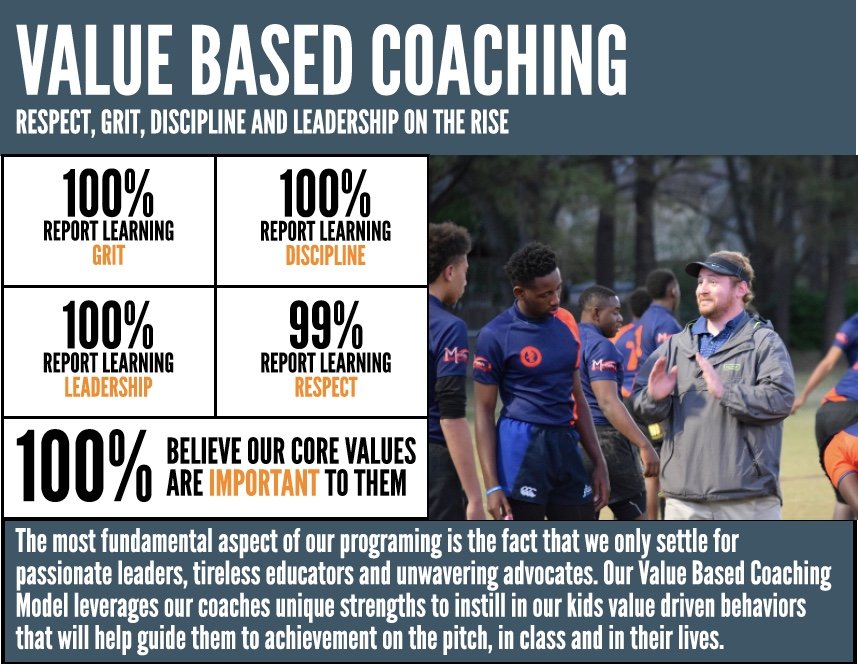 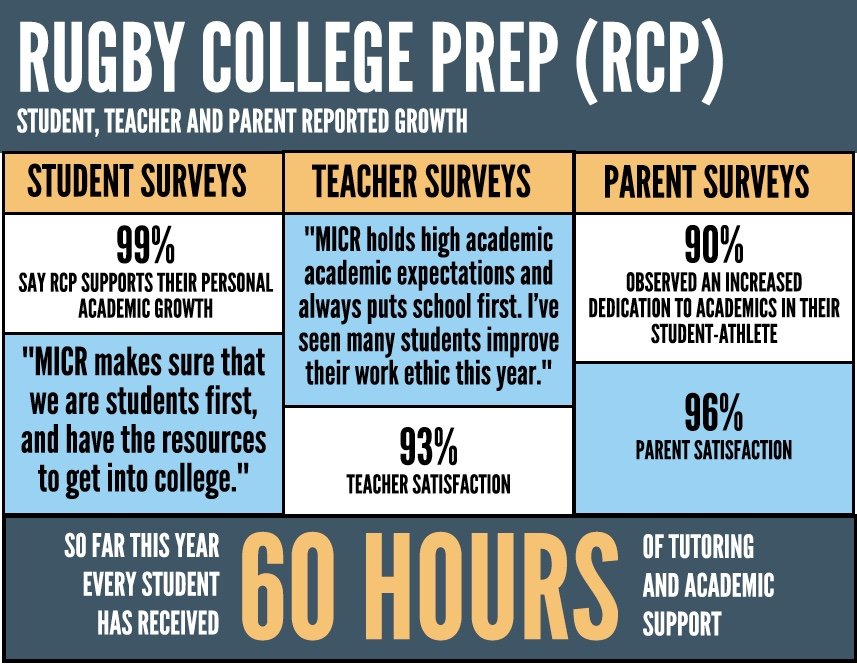 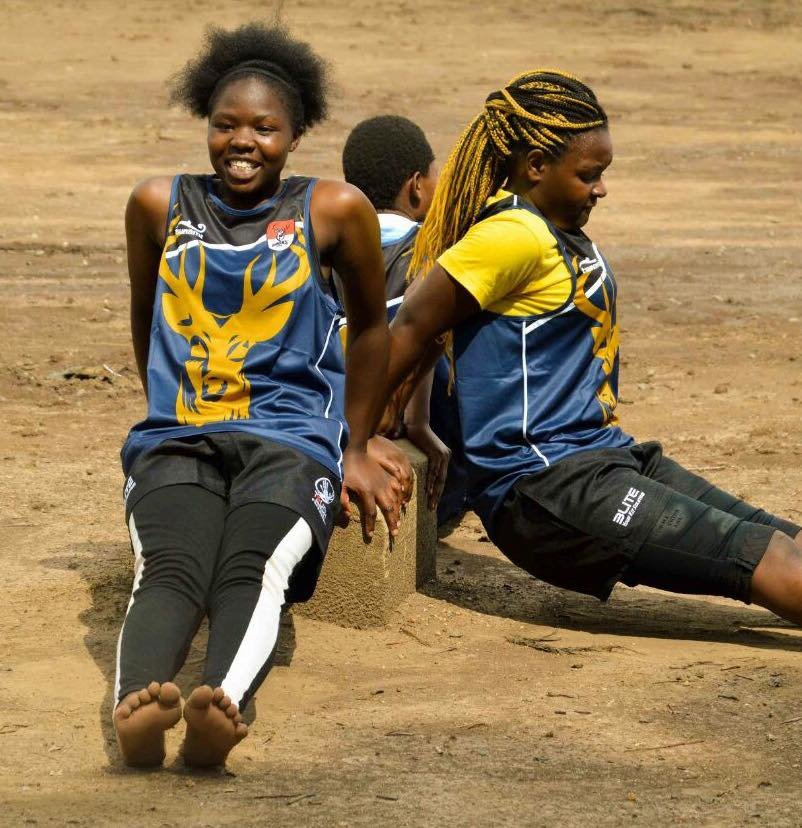 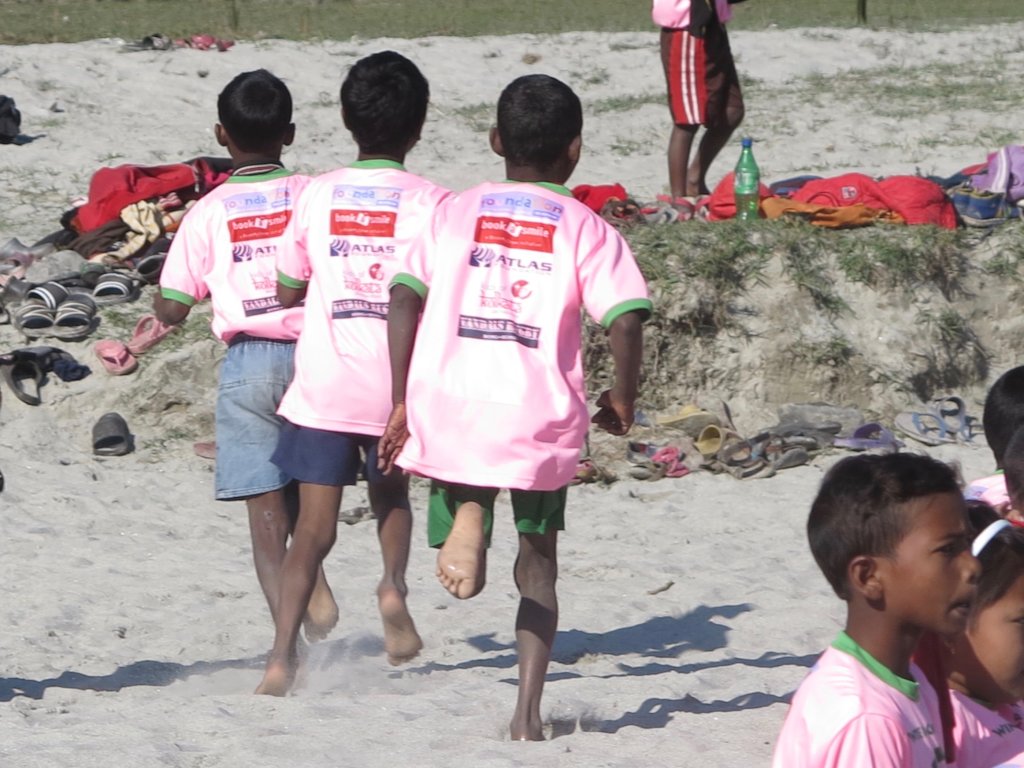 We are pleased to hear that the USA is no longer under such stringent national Covid-19 restrictions. The Atlas Foundation have been able to offer financial support to a number of programmes throughout the USA during the pandemic, ensuring children and families got the support they needed.

We are delighted that our projects are able to start scaling back up to pre-pandemic levels of activity. We are planning a weekend of charity fundraising events surrounding the USA vs Ireland rugby match in Las Vegas in October. This will include a Long Lunch, Golf Day and Hospitality Suite at the Allegiant Stadium for the game. We are hoping to raise enough funds to support a Memphis Inner City Rugby initiative, bringing eight squads of young people together from across the USA to play in a rugby tournament, creating positive memories and embedding the values of rugby that are helping them to succeed in all areas of their lives.

The Atlas Foundation has recruited three new champions in recent months that we hope will raise the profile of the charity in the USA. We were able to give The Todd Clever Foundation a grant to provide kits for projects around America, some of which were invited to take part in the Quest for Gold Sevens Tournament in California. We are thrilled to have them onboard and look forward to continuing to work with them in the future.

Thank you for your continued support, your donations give children around the world the chance to thrive.

As national lockdowns continue throughout 2021, many of our children and family's oversea remain incredibly concerned with the threat of malnutrition, starvation as well as Covid-19. So still in May we are focusing our efforts on maintaing our support in providing emergency coronavirus releif to our projects around the world.

This is not to say we haven't passed some positive milestones since our last report. Indeed, after the success of our London to Cape Town Virtual Fundraiser, DigiBus No.2 for South Africa is in the fabricators and due for delivery in the summer. Like DigiBus No.1 it will be fitted with Covid misting systems, tables, laptops, and CCTV security cameras. If you missed our challenge and want to make an impact you can! Buy parts of the DigiBus here - https://www.atlasdigibus.com/

As restrictions have lifted in the UK, we are looking forward to hosting our long awaited Golf and Cycling Days in the coming months. It's not too late to buy tickets either.  Click the link to learn more - https://www.atlasfrc.org/Listing/Category/events

As we have now partnered with The British & Irish Lions Trust, we look forward to some exciting times ahead. Make sure you keep up to date with our social media channels, so you don't miss a thing!

As national lockdowns continue into the New Year, many of our children and family's oversea remain incredibly concerned with the threat of malnutrition, starvation as well as Covid-19. So still in January we are focusing our efforts on maintaing our support in providing emergency coronavirus releif to our projects around the world.

This is not to say we haven't passed some positive milestones since our last report. Indeed, in August our Kenyan DigiBus became fully operational and open to children of the Kibera slum. Fitted with Covid misting systems, tables, laptops, and CCTV security cameras, we have loved been able to welcome small groups of children onboard the bus, in a Covid safe environment. After the success of this bus, we have also begun plans for our second DigiBus, this time for children in South Africa. You can see more about this campaign here: https://www.atlasfrc.org/news/atlas-digibus-for-south-africa

In recent months, we have also hosted our first successful online event with Nick Mallet, Matt Pearce and Gavin Hastings. It was a clash of commentators, with fantastic prizes, special guest call-ins, Q and A's and lots of fundraising for our children in South Africa. Plans are now underway for our next online event so we can continue to advance education and opportunity through rugby. 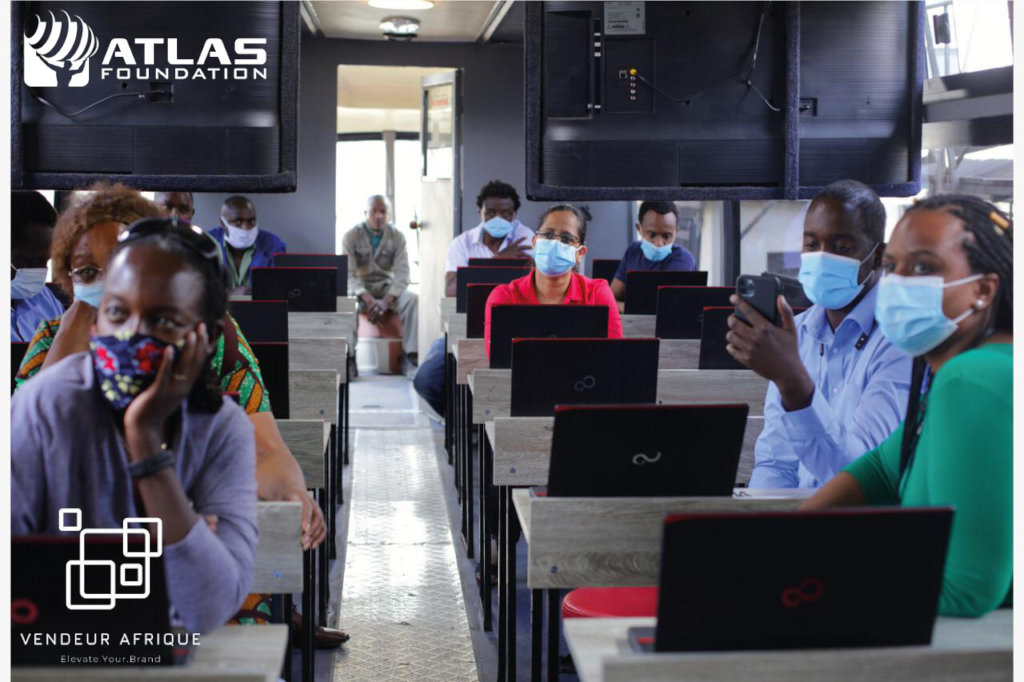 Since the global lockdown, many of our children and family’s overseas have been more concerned with the reality of dealing with the greater danger of malnutrition and starvation than Covid-19. Into August this remained a critical worry. So we chose to maintain our support in providing emergency coronavirus relief to our projects around the world.

Back in May, the Atlas Foundation joined forces with the RAF Police Rugby team (aka The Flying Pigs) in a challenge to virtually circumnavigate the Globe. The 25,000-mile adventure was to be carried out collectively around the world; walking, running, hopping, cycling any which way we could. In a fantastic team effort, the team completed over 70,000 miles/113 kilometers over 7 days. The objective of this challenge was to raise awareness and funds for the many kids and families around the world who have been affected by Coronavirus. In Singapore, we had a great sign up and equally, big mileage completed! Through the Anita, Alex & Annabel Nicholson Memorial Fund we raised over SG$ 7,000 with proceeds going to the foreign workers living in dormitories who have been hardest hit. While the government had provided medical support and food for these workers, they were isolated from their families and the outside world. On Saturday 1st August we visited one of the dorms to supply care packages which included fans, deodorant & body wash.

In other parts of the world, a similar effort was mobilized throughout this month. In Argentina, despite rugby training not being possible, our rugby family came together to protect one another. In March, Virreyes Rugby Club was transformed into a dining hall, with an army of volunteers cooking and delivering 1,000 meals every day to the doorsteps of the poorest neighborhoods. Since the pandemic first began over 40,000 meals have been delivered and this is continuously rising as the numbers of those in need are growing daily.

Finally, while the world has seemingly been on hold, August gave us optimism as long-developed projects came to life and online events were borne. In August, our Kenyan Digibus became fully operational and open to children of the Kibera slum. Fitted with tables, laptops, corona mod cons, disinfecting misting systems, and CCTV security cameras, we are so excited to welcome the children on board to their new classroom when it is safe to do so. Our first online event Driving Forward was also an enormous success, with a hundred attendees, donations still being counted, and other events in the pipeline. 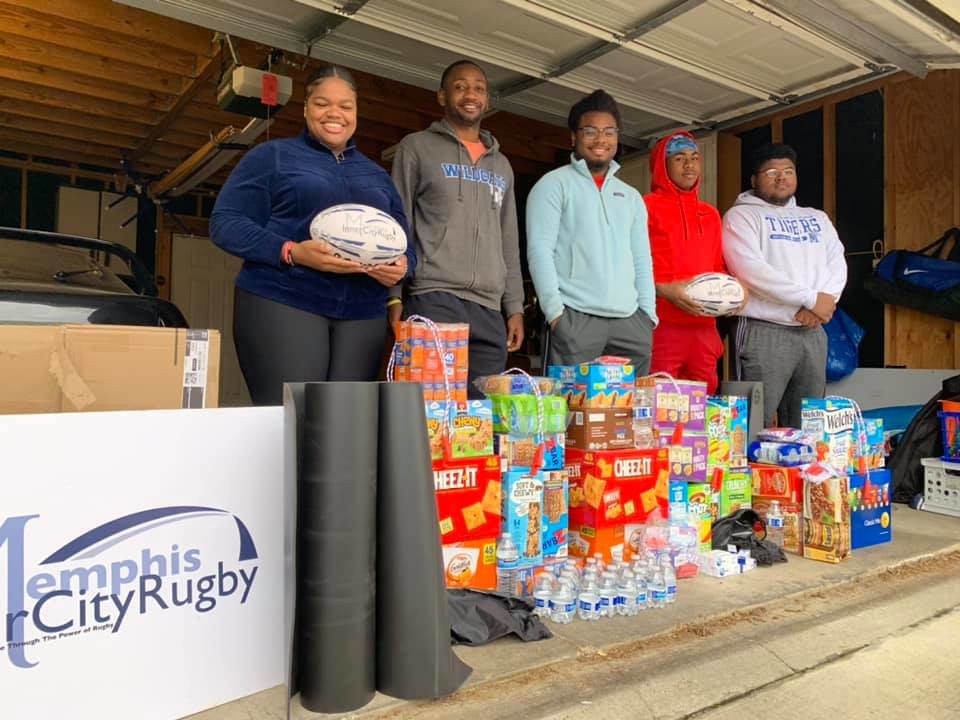 Currently we are diverting most of our funds to be able to support emergency coronavirus relief efforts by our projects around the world. Initially we were terribly worried about what Covid-19 would do when it hit the slums and shanty towns in which our kids. What has actually devastated them is the loss of food, crime from people desperate for something to eat, and the risk of disease and starvation.

In South Africa, our coaches have been making masks and distributing food vouchers to our kids and their families, and in Memphis, USA the team have coordinated an amazing community-wide effort to help support kids with their education and wellbeing through donated laptops, gym equipment and online educational programmes as well as delivering vital food and health supplies.

We have recently been part of a large online effort organised by the RAF Police Rugby team, the Flying Pigs, who led the Around the World in 7 Days Challenge.

The RAF Police Rugby team want to show their support and raise money for rugby and forces charities doing great work to support kids and families in the midst of the coronavirus pandemic.

In the UK, Atlas will be one of 5 charities (NHS Charities Together, The Atlas Foundation, Rugby For Heroes, RAF Benevolent Fund, Scotty’s Little Soldiers). In the USA, Atlas will be the sole charity.

It is also a great opportunity to pay tribute to the men and women of the forces who lay down their lives to keep us safe. We are privileged and humbled to be nominated by the RAF Police Rugby Club.

Project Leader:
Sally Pettipher
Ross-on-Wye, Herefordshire United Kingdom
$49,582 raised of $100,000 goal
You last donated to this project on
152 donations
$50,418 to go
* Amounts in US Dollars
Donate Now
Donate once
Donate monthly
$10
USD
could provide kit for one child
›
$20
USD
is the cost of one training session
›
$100
USD
cost of a weeks training
›
$500
USD
pays for transport and competition costs for one school
›
$1,000
USD
pays for a month of coaching
›
$5,000
USD
pays a whole school programme for one year
›
$10,000
USD
pays for two years of the school programme
›
Make a monthly donation & get matched today at 100% while funds remain. Terms and conditions apply.
Give the gift of stability in a time of instability. Set up an automatic, monthly gift now and get matched at 100%—because the COVID-19 pandemic has hurt us all, and it will take all of us to overcome it. Terms and conditions apply.
Monthly giving is as easy, safe, and as inexpensive as a Netflix subscription. Start a monthly donation to The ATLAS Foundation today and get matched at 100%. Terms and conditions apply.
$10
USD
monthly
will support one child per month through the programme
›
$20
USD
monthly
pays for a coach to work in a school once a month
›
$50
USD
monthly
pays for a coach to work twice a month in a school
›
$100
USD
monthly
pays for a full month of coaching for 100 boys and girls
›

Donating through GlobalGiving is safe, secure, and easy with many payment options to choose from. View other ways to donate
The ATLAS Foundation has earned this recognition on GlobalGiving:

Vetted since 2016
Add Project to Favorites

GlobalGiving
Guarantee
Donate https://www.globalgiving.org/dy/cart/view/gg.html?cmd=addItem&projid=26774&rf=microdata&frequency=ONCE&amount=25
Please Note
WARNING: Javascript is currently disabled or is not available in your browser. GlobalGiving makes extensive use of Javascript and will not function properly with Javascript disabled. Please enable Javascript and refresh this page.