Feeding the most vulnerable during #COVID19 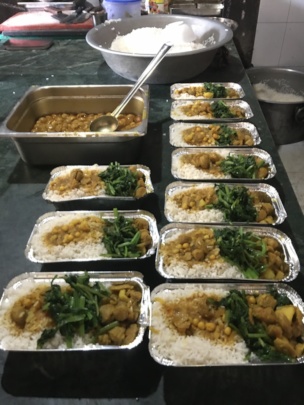 As you all know, the global-pandemic did not stop on the borders to Nepal and we find ourselves in a lock-down since more than one month by now and it has been extended until May 7th.

This is a big challenge for all of us and we are trying to cope as best we can and continue the support for our beneficiaries.

It is very difficult to know how this crisis will unfold in Nepal and what the long-term consequences will be, but we have prepared an austerity plan for the coming months to make sure that our beneficiaries will not suffer from food-insecurity and hunger.

It is not all that bad here. The chronograph says 54 people  have been infected with the virus and 16 of them have receovered completely in Nepal but we have not seen an urgent enough escalation in testing and contact tracing and these figures could be widely underestimated. However there are no deaths.

There is a real danger that more people could potentially die from the economic impact of Covit-19 than from the virus itself. It is our MISSION to prevent the horrible suffering that is caused under these circumstances and we are more motivated and inspired than ever to do what is in our means support and protect the most vulnerable and at risk!

We have been trying our best to do what we can at various times. As soon as news broke out , the first thing we did was to ake aware our beneficiaries about the Corona Virus, the way its infected, the symptoms and ways to prevent.

Followed by this we started in the process og General Awareness for everybody around through our social media (Organization and personal of our board members and staff).

Post the lockdwon, there were various reports that people were stuck in Pokhara city (where our organization is based). They could not go to their homes and with the closure, they started to worry about hunger.

The government tried to provide some relief but the number became too large as time progressed. The lockdown got extended as the numbers increased and people started getting anxious and worried that they'd die of huger than the virus itself.

We therefore decided to feed them people and their children in coordination with the local government. Till date we have fed 1600 meals to the most underprivileged and marginalised of them all.

Also staying true to our work, we found the other important aspect of concern was the kids below 1. These children would have no other means than 'mother's milk' and imagine the case, when the mother is herself half fed! We therefore distributed "Litto" (a porridge like butritive food for kids) to 35 mothers.

These are very difficult and challenging times in deed and all of us have to up the ante. In Nepal people find it easier to go into survival-mode and we are ready to make personal sacrifices if the situation is requiring this. But for the poorest, “survival-mode” is their reality since long and they can’t survive with less than what we are providing them, lest hunger and misery will knock on their doors.

In the name of our beneficiaries we humbly request for your support! Please donate whatever you can at this stage! Our work is more important than ever and we need your support to continue our work and if ever possible increase our support for our target-groups in the difficult times ahead. 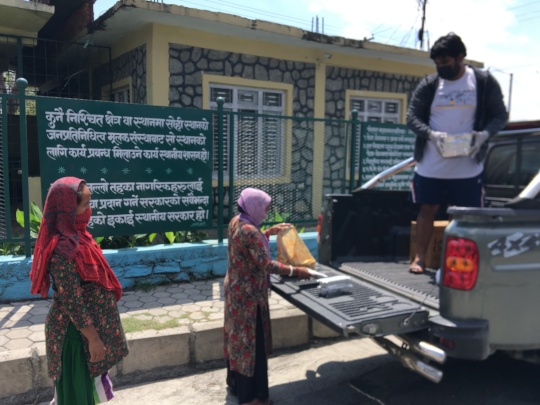 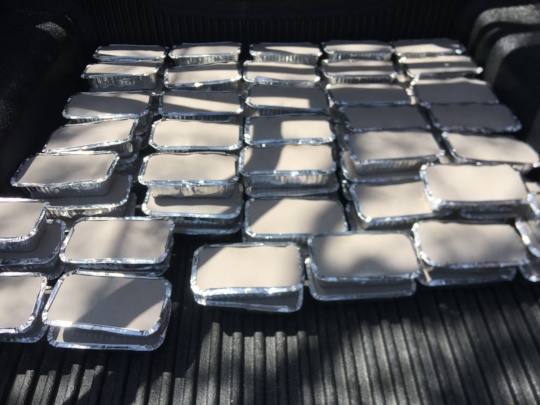 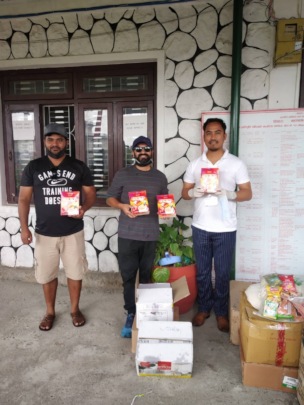 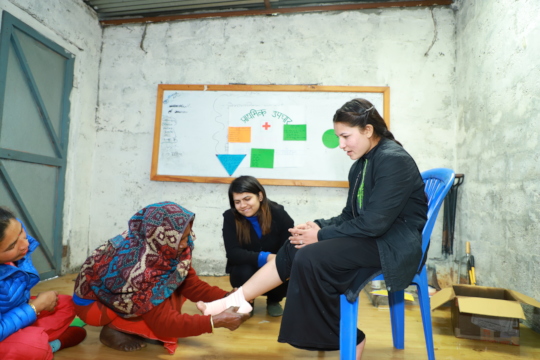 First aid is the first and immediate assistance given to any person suffering from either a minor or serious illness or injury, with care provided to preserve life, prevent the condition from worsening, or to promote recovery.  It includes initial intervention in a serious condition prior to professional medical help being available, such as performing cardio pulmonary resuscitation (CPR) while waiting for an ambulance, as well as the complete treatment of minor conditions, such as applying a plaster to a cut. A First aid is generally performed by someone with basic medical training. It doesn’t class as medical treatment and doesn’t replace interventions from a trained medical professional.

There are many situations which may require first aid, and many countries have legislation, regulation, or guidance which specifies a minimum level of first aid provision in certain circumstances. The provisions of specialist first aid cover at public gatherings, or mandatory first aid training within schools. First aid, however, does not necessarily require any particular equipment or prior knowledge, and can involve improvisation with materials available at the time, often by untrained people.

b) To maintain respiratory functions.

a) Preserve Life: The overriding aim of all medical care, including first aid, is to save lives.

b) Prevent further harm/danger of further injury: This covers both external factors, such as moving a patient away from any cause of harm, and applying first aid techniques to prevent worsening of the condition such as applying pressure to stop a bleed becoming dangerous.

c) Promote Recovery: First aid also involves trying to start the recovery process from the illness or injury, and in some cases might involve completing a treatment, such as in the case of applying a plaster to a small wound.

To build capacities of Educare Families to manage injuries and illness during normal daily life.

During family visit, we came to know Educare families were lacking knowledge of managing first aid service to injured or sick. So we planned to conduct first aid program. All families were informed through phone calls regarding time and venue.

The first aid program was conducted by using following methods:

For successful conduction of programs Chart paper, Posters and Roller bandage were used.

Provide first aid training to Educare families. First aid course includes what should we do in case of:

Demonstration of all procedure and technique of bandaging in an injured area.

Provide health information that can assist in prompt and appropriate first aid response to medical emergencies.

Encouraging them to build their communication skills, self confidence, leadership and ability to work well with others.

There were 25 participants in first aid program. This program was conducted to train first aider and provide immediate support to the injured person so that to improve safety awareness and preventing injury and illness in their house, workplace and community. All the participants were able to learn the things what we actually wanted to teach.

In addition the result has been achieved in a timely and cost effective manner with one health staff and all of interested participants were utilized using available resources.

First aid program was highly effective as is clear from the ability to achieve the outcomes as set out in the program objectives. The program has made significant progress toward the outcomes having contributed to prepare educare families for emergency accidental response. This can be known by asking them at the end of the program. They were able to demonstrate the technique of bandaging too. It means the first aid program will be able to establish positive health behavior in their family members.

Poverty In Nepal & Impact by the "Bahini Educare Foundation"

Despite some progress in poverty reduction in recent years, Nepal remains one of the poorest countries in the world with the Human Development Index 2018, placing it 149th out of 189 countries listed in the United Nations Human Development Report 2015.

Over 30% of Nepalese live on less than $ 14,- per month. While the overall poverty rate for Nepal is 25%, this figure increases to 45% in the mid-western-region and 46% in the far-western-region. In the remote hill (2500 M) and Mountain regions, the terrain is rugged, rainfall is low and the poor quality soil is difficult to farm. Agricultural holdings per household are the smallest in the country.

About 80% of Nepal’s people live in rural areas and depend on farming for their livelihood. Food insecurity and mal-nutrition are major concerns in these areas. Most rural households have little or no access to primary healthcare, education, sanitation, safe drinking water or other basic services.

Poor rural in Nepal generally have large families, very small land holdings or none at all, and high rates of illiteracy. They are also confined to and concentrated in specific ethnic, caste and marginalized groups, particularly those of the lower casts (Dalits), indigenous people (Janajiti’s) and WOMEN!

After the two devastating earthquakes that struck Nepal in 2015, many of the poorest lost their habitat and their assets. Many of them had no other choice but to migrate to the cities to escape the harsh winter in the mountains. In the hope to find work and better living conditions in the urban areas’ they left their villages, only to end up in the slums that are surrounding the big cities were the majority of them are living a life in misery and constant danger.

THE RURAL POOR IN NEPAL INCLUDE:

1.)   Destitute people, such as those who are sick, disabled or displaced, and abandoned children.

2.)   Extremely poor people, such as illiterate and/or landless individuals and those who have no assets.

3.)   Moderate poor people, such as those who have small farms but are heavily indebted.

4.)   WIDOWS WITH DEPENDENT CHILDREN who have been rejected by their in laws, who are landless and without any assets.

THE IMPACT BY the “Bahini-Educare-Foundation” (BEF)

BEF is reaching out to the most vulnerable groups, especially destitute-Single Mothers-Grandmothers and Widows with dependent children.

BEF has demonstrated that even the most modest amounts of resources given to the most underprivileged and at high risk can dramatically improve their quality of live and thus help many of the poorest to find a sustainable path out of the vicious cycle of poverty, and this by creating a minimum of dependence for our beneficiaries!

An impact evaluation is showing that the overall welfare of the twenty BEF-FAMILIES assisted by us in 2018 improved by 80%.

a.)   the incident of Food-Insecurity has improved by 100%

b.)   the incident of health-insecurity has improved by 80%

c.)    The incident of hygiene-insecurity has improved by 80%

e.)   The incidence of inappropriate shelter has improved by 70%

f.)      The incidence of insufficient clothing has improved by 80%

g.)   The incidence of general insecurity has improved by 70%

Our program is also helping to enable access to healthcare, psychological related treatments, legal advice and assistance if needed, and is actively creating women-empowerment-programs.

‹ 1 2 3 4 5 6 7 8 ›
WARNING: Javascript is currently disabled or is not available in your browser. GlobalGiving makes extensive use of Javascript and will not function properly with Javascript disabled. Please enable Javascript and refresh this page.