COVID-19 Experience: A case from the ground 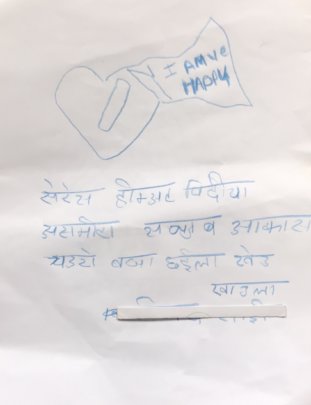 Ram is a male client in his thirties. He has been diagnosed with paranoid schizophrenia and he experiences auditory hallucinations and persecutory delusions. Ram is dependent on his elderly mother for food, medication and hygiene. Low self-esteem and feelings of anxiety cause a reluctance to engage socially. At the weekly Welcome Centre that we run he has limited conversations only with staff and familiar clients and carers. Prior to the lockdown, our field staff visited Ram once per week, primarily to support him with his medication which has been particularly challenging. When provided with a larger supply, on several occasions Ram has taken too much at once.

Ram is coping relatively well with the lockdown conditions. Ram understands the virus and infection prevention but does not worry about it because he meets so few people. Being confined to his home had little impact on his normal routine.  Many times we have been delivering relief food and medication supply. At times we have coordinated with the local ward and other community leaders, to support Ram and his mother to receive relief support from the government.

Ram does not have access to mobiles, TVs or radios for communication and information.  Before the first lockdown( Nepal implemented the first lockdown from 24th March 2020) we provided him with the analog mobile phone so that support can be made possible even though he will be homebound (due to the lockdown). For us simply providing Ram with a mobile phone was however insufficient. We have also been constantly trying to provide training on its use as he has been struggling.  Finally, after many months of training, he can now answer our call, charge the phone but still struggles to call us back.

Our telecommunication support involves compassion, empathic listening and humour while our clients and carers (the main person responsible for the day-to-day unpaid care of the family member that has a mental disorder)  share their experience of strong emotions.  In this way, we are maintaining our support services, and the obstacles imposed by Covid-19. This is an activity that both Ram and his mother a carer enjoys.

Ram loves music, art and drawing. We have now started entertaining him by playing some music from our end, this has been a lot of fun. We have also provided Ram with some drawing materials (Pen. Pencil, colors, papers). He has been drawing and writing as a medium to communicate and express himself. 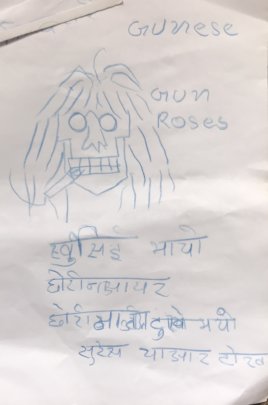 Sita is a charming 37-year-old who is not afraid to speak her mind. She likes to wear makeup, beautiful clothes, jewellery and always makes an effort to look nice.

When her family realized Sita was suffering from mental health problem, and were under the impression that marriage would cure her. While married and living away from the family home for one year her condition was somewhat stable. However, she contracted typhoid and after receiving medication for such her condition worsened and she became violent and started to roam undressed in the streets. Sita’s partner and his family were neither supportive or compassionate when her mental state declined, rather, they were ashamed. The marriage was broken off and Sita moved back into her family home.

After few years her mental condition deteriorated as a result of stress over her brother’s disability. She has always been very close with her brother. Her brother was paralyzed after falling from a tree at his place of employment, rendering him immobile and incapable of independently caring for himself. At this time she became violent and her family, unaware of how to deal with her, tied her to a chain-link fence outside of the home.

Sita’s  family sought the help of traditional healers. The family, unaware of how to support Sita, and under the impression she was incapable of any level of recovery, contacted Chhahari with the request of ‘taking her away’. With the support and knowledge passed on by Chhahari the family was able to make an informed, and humane, decision regarding the care of Sita.

For the past 4 years Chhahari has been supporting Sita and her family. With the support from Chhahari her treatment started and she has been diagnosed with bi-polar disorder . She now works as a part-time cleaner at a local school earning approximately 3000 rupees/month( 40 USD). Her medication costs are approximately 1500 rupees/month( 20 USD) , sometimes more.

Last year on 1st of April her brother passed away and since then she is finding very difficult to cope. Now, due to lockdown she has not been able to continue her work as a result  her mental state deteriorated  and subsequently relapsed twice this month. She is now admitted in Patan Mental Hospital, Nepal’s only government Mental Hospital. Chhahari has been continuously supporting Sita and  providing service; arranging for warm food deliveries for both Sita and her mother. Also, continuously in contact with her doctor and providing support during this crisis time. Sita says  "During this difficult time Chhahari family remembered and cared and found ways to provide hot meals for me and my mother. I just wish Chhahari family can come and visit me frequently as I miss having conversation”. 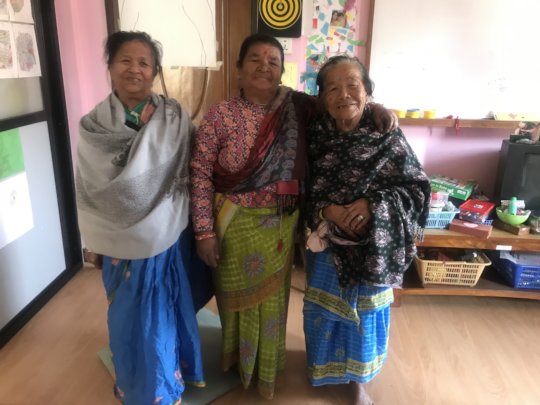 Carers getting together at Chhahari

About twenty years ago during a rainy day Sita’s house collapsed killing her husband. Few years after that her daughter died of cancer. She now has a son called Raju who is suffering from serious mental health problem. She says Raju was a smart boy, used to speak “good English” and “worked as tourist guide”. He used to “earn money and bought everything he needed during that time”. “He even missed classes to work as guide”. One day he left to visit pilgrimage in India. Sita was “not comfortable about sending his young son on a pilgrimage” but his “appeal and desperation” was such that she had to “relent to his demands”. It came as a great relief to her to know that her son was not travelling alone. He had 3 other friends who was going with him.

However, while travelling to holy sites in India he was somehow disconnected from his friends and got lost. When his friends came back to their homes Sita was “devastated” to learn that her son was not with them. They told her that Raju was “lost in India”. Sita went to police station to report about him. Finally, one of the “senior police officer” “accidently found” Raju in a southern city near Nepal-India border and immediately contacted the family and helped to bring him back to his home. Since then he suffered from serious mental problem.”

Sita is his only carer. She cooks food and looks after him every day. One time when she was accidently hit by a school bus, she had to be hospitalized for 8 days. During this time Raju had to survive on instant noodles and water. Sita is already 76 years old and have been the only person taking care of her son since his mental condition deteriorated.

“I used to be invited by my brothers and sisters during every festival. But now they invite me no more. I could not go to their parties because I don’t want to leave my son in this condition. Now I have nowhere to go. I have nowhere to turn to. All my relatives have abandoned me. Sometimes I feel as if my entire life is one big punishment. I have no rest and no holiday”

Sita with the support of Chhahari Social Worker took him to mental hospital where they were informed that he was suffering from serious mental health problems One of the “major problems” with Raju is that he himself is not able to remember which medicines to take regularly while his mother is “old and cannot remember it either”. Not taking medicines regularly have made his recovery progress slow.

Chhahari social workers have “drawn a colorful chart of various medicines and various times to take it” and have even stuck it in Raju’s room wall but he still forgets to take it.  Social workers have even tried by giving a cell phone for Raju so that they could phone him or Sita to remind them of taking medicine regularly but “they had difficulty in learning to use the phone”. Social workers are worried that his irregular consumption of important medicines could “worsen” his mental conditions and that is the main reason why they frequently organize home visits to his place.

Chhahari Social workers have also played an active role in fixing appointments for him with doctors. They also frequently accompany Raju and his mother Sita to the hospitals to consult with doctors. Sita explained why she appreciates when social workers accompany her and her son to hospitals:

“The doctors are very intelligent, and they think we are like them. They speak very fast and use words that we do not understand. Whenever I stop them when they are speaking to ask what they have just said they will tell me “just give him this medicine and meet me next month”. After the appointments with the doctors are over the Chhahari social workers explains to me very slowly about what the doctors had said during the appointment”